The TDM™ Model in Action: One Family’s Experience

The TDM™ Model in Action: One Family’s Experience 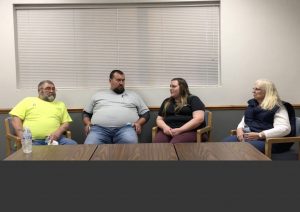 The Kansas Department of Children and Families (DCF) launched the Team Decision Making® (TDM) model in 2019 to improve the likelihood of success for families involved in the system. The team at DCF—with permission from the family—has shared the following story. Along with this article, please view a brief video recording of the family talking about their experience with Brandi Lewis, TDM supervisor.

“They gave all of us our own time to talk … you got to be open and free and talk as much as you needed to.”

“I think everything was handled very quickly, very well. The kids were placed back home really fast, and that was the goal.”

“You hear a lot of horror stories and it’s scary … that DCF, they just come in and take your kids, and it’s nice to learn that’s not the case.

“It was a bad situation that ended better. Way better. There was a lot of support. A lot of ‘hey let’s get you through this. Let’s work together. Get you to that end goal’.”

This is some of the feedback we heard from the family after they went through the TDM process.

It all began with a report to DCF of an 11-year-old girl and 8-year-old boy placed into police protective custody. The report alleged physical abuse of the girl by her stepfather. This abuse included incidents of slapping over the previous two weeks that led up to the child being placed in a chokehold with a knee in her back. The child’s school had noticed a change in her demeanor, and the girl had written a letter to a teacher about what was going on at home. Angela Haas, a child protection specialist, staffed the case with her supervisor, and they determined that it met criteria for a TDM meeting.

Angela prepared the parents for the meeting, explaining the process and DCF’s hopes for the family. She emphasized the importance of the family being heard and being part of planning for their children’s safety, as they know their family and situation better than anyone else. Angela told them that DCF staff, including Harold Murphy, a child protection services supervisor; family support people; and the family would work together in the meeting to make a recommendation to the courts. They would decide together what needed to happen to ensure the children’s safety moving forward.

Then Angela worked with the family to identify support people and possible placements, even though the family hoped to avoid placement of the children outside their home.

The success of the meeting itself was due in part to the family support people in attendance. Along with the parents, children, and DCF staff, grandpa and his ex-wife (who was emergency placement for the children) were at the meeting. As a TDM meeting facilitator, Jordyn Sharp engaged the family in a conversation about the worries and concerns. Due to the prep work Angela did with the family, they knew the safety concerns for the children and brought them up before DCF did. The support people addressed the parents about their actions that were harmful to the children and offered to help the family make some changes.

Angela also recommended to the county attorney that the police drop their temporary custody of the children before the placement hearing was held, which usually happens in the opposite order. The timing was important to the family because otherwise the parents would be unable to attend their son’s school program—something they had never missed. Instead, the parents made it to the program, and their children returned home.

“We have the kids back and it has changed for the better at home,” said mom in the video. “We’ve all learned from this situation a lot.”

Angela Haas, Brandi Lewis, and Jordyn Sharp are child welfare professionals with the Kansas Department of Children and Families.

The Kansas Department of Children and Families (DCF) launched the Team Decision Making® (TDM) model in 2019 to improve the likelihood of success for families involved in the system. The team at DCF—with permission from the family—has shared the following story. Along with this article, please view a brief video recording of the family talking…
We use cookies on our website to give you the most relevant experience by remembering your preferences and repeat visits. By clicking “Accept”, you consent to the use of ALL the cookies. However you may visit Cookie Settings to provide a controlled consent.
Cookie settingsACCEPT
Manage consent