Meet Our Judges for the 2021 Distinguished Achievement Award

Meet Our Judges for the 2021 Distinguished Achievement Award 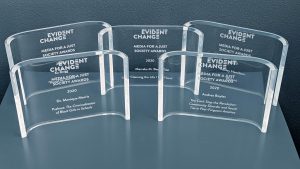 Evident Change is proud to announce the guest judges for the 2021 Distinguished Achievement Award. As the top honor of our Media for a Just Society Awards, the Distinguished Achievement Award recognizes one piece of outstanding work that offers meaningful insight into the complexities of US social systems. Past awards have honored film, TV, print/online journalism, and books that responsibly inform and inspire conversation about the systems Evident Change seeks to improve in collaboration with systems professionals and the people affected by those systems.

The 2021 Distinguished Achievement Award winner will be chosen by the following panel of guest judges.

Emmanuel Dzotsi is the co-host of Reply All. Before that, he produced and reported stories for NPR member stations and later worked on This American Life and Serial. Over the last couple of years he has covered a variety of stories at the intersection of race and culture, from a historic divide in the Alabama Democratic Party, to so-called Venmo reparations, to criminal justice reform. As a co-host on the third season of Serial, Emmanuel was part of a team that received an Edward R. Murrow Award and a Media for a Just Society Award for their coverage of Cleveland’s felony courts.

Tracy Wareing Evans is the President and CEO of the American Public Human Services Association. This bipartisan national membership organization represents the cabinet-level leadership of state and local health and human services agencies and the subject-matter experts who help execute their mission to improve outcomes for people nationwide. Tracy has a long history in high-level policy development and public administration. She served as a senior advisor to US Department of Homeland Security Secretary Janet Napolitano and as director of the Arizona Department of Economic Security, an integrated human services agency. She also served as policy advisor for human services under then Arizona Gov. Napolitano and as director of the state’s child welfare division.

C’Ardiss (CC) Gardner Gleser is the first Director of Programs and Strategic Initiatives at the Satterberg Foundation, whose mission is to promote a just society and sustainable environment. She currently serves on the boards of Andrus Family Fund, Charlotte Martin Foundation, and Philanthropy Northwest. CC previously served as the national president of the Yale Black Alumni Association and on Yale’s Board of Governors. She was a Brainerd Fellow and a partner with Social Venture Partners Seattle, where she co-chaired the Social Venture Teen Philanthropy Program. CC founded Black Ivy Manor, which provides funding and other opportunities for Black scholars, artists, and social justice advocates to develop their crafts and voices while cultivating relationships with one another. CC earned her bachelor’s degree in African American studies from Yale University and an MEd in education administration from Seattle University.

Evident Change is grateful to Emmanuel, Tracy, and CC for judging this year’s Distinguished Achievement Award. We look forward to announcing the winner later this year.