Meet the Media for a Just Society Awards Finalists

Meet the Media for a Just Society Awards Finalists 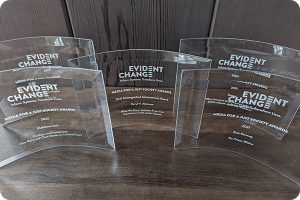 Each year, we recognize media from across the United States that further public understanding of Evident Change’s focus areas, including child welfare, youth justice, adult justice, and adult protection. Many of these topics are covered regularly by the media, yet their treatment is often sensationalized and not representative of system issues the public needs to understand. The media we recognize look deeper, analyze trends, and offer insight. Media for a Just Society Awards are given in the categories of book, film, journalism, media by a person who is incarcerated, podcast/radio, television/video, and youth media.

Evident Change is proud to announce the finalists for this year’s Media for a Just Society Awards. These writers, journalists, podcasters, filmmakers, and creators are raising awareness of the issues in our social systems so that the general public can join us in working for reform. We congratulate these creators and invite you to come back in September to learn this year’s winners!

“She Supported Her Child Being Trans. So the State Separated Them.”
Roxanna Asgarian
Intelligencer

MEDIA BY A PERSON WHO IS INCARCERATED

They can never lock your mind up.’ Three stories from juvenile jail
KUOW’s RadioActive Youth Media

“When The Prison Banned Board Games, We Played Chess in Our Minds“
Harlin Pierce
The Marshall Project

“Not Allowed to Be a Kid”
Amaru Howard
Youth Communication NYC

“When I Lived in a Shelter, I Still Kept My Head Held High”
Sirsy Galarza
Youth Communication NYC