September 5, 2018 | by the Governing Board of the Players Coalition | The Players’ Tribune 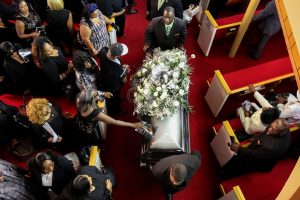 The Players Coalition, a nonprofit organization governed by 12 NFL players from across the country, wants to bring attention back to why players began protesting the National Anthem at NFL games in the first place. In an article published this week, the coalition recalls the 2015 police shooting of Corey Jones, a musician and the cousin of NFL veteran Anquan Boldin. Jones was shot and killed while waiting for roadside assistance after his SUV broke down on his way home from a gig. With the desire to raise awareness around the number of people of color killed by police and other racial disparities, such as those within the criminal justice system, Boldin helped to found the Players Coalition in 2017. The coalition’s recent piece, which can be read here in full, describes many of their efforts to “create a better country for every citizen.”