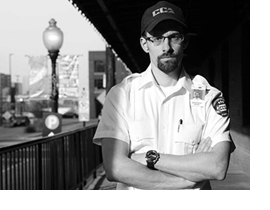 Each year as part of our Media for a Just Society Awards, NCCD recognizes one superior achievement in journalism, filmmaking, or other media that brings the systems we work with into the spotlight. The Distinguished Achievement Award was created to honor works with lasting, singular impact that illustrate current realities or the promise of reform. Past recipients include Bryan Stevenson (Just Mercy), Ryan Coogler (Fruitvale Station), Andrew Solomon (Far From the Tree), and Moira Demos and Laura Ricciardi (Making a Murderer).

We are proud to announce the winner of this year’s Distinguished Achievement Award: Shane Bauer, author of the award-winning article in Mother Jones, “My Four Months as a Private Prison Guard.” By going undercover to work inside a private prison, Bauer offers a unique perspective on the need to reconsider private prison use in the United States. His intensive research adds another credible, clear voice to the discussion surrounding prison reform in this country. NCCD congratulates Bauer for this achievement.