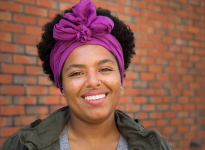 Youth Radio’s investigative series Unlocked shines a light on the juvenile justice system: what’s working and what’s not. For more than four months, I worked alongside a team of reporters and producers to report these stories for NPR’s Morning Edition and All Things Considered.

Youth Radio’s reporting included a Freedom of Information Act request to obtain original data from Alameda County Juvenile Hall—data which ultimately proved that the safety and well-being of young detainees was eroding, while the county probation department was struggling just to provide the minimum state-mandated staffing levels inside the locked facility.

Unlocked spurred a local review of juvenile justice policies and sparked a public conversation about how to best rehabilitate young people. The Alameda County Board of Supervisors was briefed on Youth Radio’s reporting, and producers formally presented our findings to the county’s Juvenile Justice and Delinquency Prevention Commission (JJDPC).

“The story became a major catalyst within the county to address and improve conditions inside,” wrote Jessica Selvin, vice chair of the JJDPC. “Youth Radio was able to secure data from county probation officials that even the Juvenile Justice Commission was not able to obtain, despite repeated requests by commissioners.”

Our story about Wayne County, Michigan, showed a county that has implemented sweeping juvenile justice reforms credited with massive reductions in recidivism. For that story, I profiled Debbie, a Detroit teen who had recently graduated from high school while concurrently serving probation. She credits much of her success to court-ordered wraparound services.

“There’s a lot more to life than being behind bars,” says Debbie. “I’d rather be free. And be with my family. See my family grow up. Grow old.”

For me, telling Debbie’s story was also about putting a face to policy discussions and the true stakes of the juvenile justice system—rehabilitating young lives.

Soraya Shockley is a reporter for Youth Radio. The Oakland, California, native attends Harvard University. Her Youth Radio reporting has aired on NPR’s Morning Edition, NPR’s All Things Considered, and KQED, and appeared on the online publishing platform MEDIUM.

Youth Radio’s investigative series Unlocked shines a light on the juvenile justice system: what’s working and what’s not. For more than four months, I worked alongside a team of reporters and producers to report these stories for NPR’s Morning Edition and All Things Considered. We highlighted three main topics: Dangerous conditions for youth at the juvenile hall in Alameda County,…
We use cookies on our website to give you the most relevant experience by remembering your preferences and repeat visits. By clicking “Accept”, you consent to the use of ALL the cookies. However you may visit Cookie Settings to provide a controlled consent.
Cookie settingsACCEPT
Manage consent