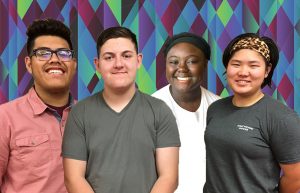 NCCD tried something new this year: We invited young people to review the youth media category for our annual Media for a Just Society Awards. The reviewers expressed both surprise and awareness as they discussed the media pieces vying for the award in that category. And despite their varying knowledge about the complex social systems NCCD works to reform, they appreciated the importance of sharing meaningful stories about individuals caught up in them.

NCCD’s Media for a Just Society Awards recognize outstanding media that help to further public understanding of the child welfare, criminal and juvenile justice, and adult protection systems. The youth category highlights such media created by writers, filmmakers, and podcasters who are ages 25 and younger. NCCD uses age 25 as the cut off for the youth category based on medical research showing that the human brain continues to develop until around age 25.

Our reviewers for the category this year also fall into the 25-and-younger category. Eduardo and Grace, summer interns at NCCD, and two additional high school students, Jevona and Dario, individually listened to, watched, and read six entries in the category before meeting up to discuss their picks.

The group was unanimous in its choice for category winner (to be announced soon, along with the rest of the Media for a Just Society Awards finalists and winners), which happened to be the lone video entry.

Did they choose a video over writing or radio because their generation was raised on screens? “Video has been integrated into every facet of life: work, school, home,” Dario admitted. But he went on to say that “the way they did the video, plus the message they gave, was a lot more meaningful than the other articles. I felt like if I were to be a part of any of these things, I would want to be a part of that.”

They all agreed that video has advantages, like the ability to easily mix reporting styles. For example, a rapper can present a poem in between “talking head”-style interviews.

Grace added that the topic of the video—reentry—is a broad issue that impacts many people, while the other pieces of media in this category were more localized or limited in scope.

After deciding on the other finalists for the category, the group reflected on their overall experience of serving as reviewers for the Media for a Just Society Awards.

Alluding to an entry about foster care, Eduardo said, “I wouldn’t say I have a lot of background knowledge on the foster care system, but what I actually do know is that it fails most children, and I can see that it did for most of these. These articles are making people like us more aware of their situations.”

“Being a Media for a Just Society judge was exciting because I’ve never done anything like this before,” Jevona said. “I now have a deeper understanding of how the system works, and it doesn’t work well. Thank you to all the nominees—I enjoyed hearing your stories.”

Grace found the judging process especially meaningful in how it related to her work as an NCCD intern. “It’s very helpful for me to be able to connect the work I do here to a name or a face or someone’s life that’s actually being impacted,” she said. “It really inspires me to continue working on these projects in the hope that they will eventually benefit these people.”

NCCD would like to thank Eduardo, Dario, Jevona, and Grace (pictured left to right, above) for their time and thoughtfulness in reviewing the Media for a Just Society Awards youth media category. This is the last blog post in our “Youth Voices” series, which includes blog posts written by Eduardo and Grace. You can find the full series here.

Debra Illingworth Greene is the communications manager for NCCD.

NCCD tried something new this year: We invited young people to review the youth media category for our annual Media for a Just Society Awards. The reviewers expressed both surprise and awareness as they discussed the media pieces vying for the award in that category. And despite their varying knowledge about the complex social systems…
We use cookies on our website to give you the most relevant experience by remembering your preferences and repeat visits. By clicking “Accept”, you consent to the use of ALL the cookies. However you may visit Cookie Settings to provide a controlled consent.
Cookie settingsACCEPT
Manage consent