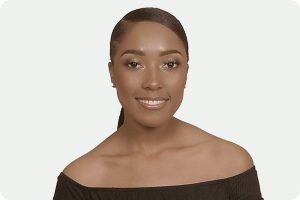 When Deajah Nunn joined Evident Change as a youth advisor in 2020, she brought along her own interests and concerns as a former foster youth. Happily—for both Deajah and her colleagues—that’s exactly why she was here.

Deajah was living in transitional housing for former foster youth (Transitional Housing Program-Plus, or THP-Plus) in the Bay Area of California at the beginning of the COVID-19 pandemic and soon was scheduled to exit the program. Deajah knew that finding clean, stable, and affordable housing in the Bay Area is always a challenge. “I assumed that COVID would worsen those challenges,” she said.

But Deajah felt capable of fighting for a housing extension. She spent most of her childhood in and out of the foster care system and learned how to advocate for herself. However, she was concerned about other former foster youth who might be facing homelessness during the pandemic—and she didn’t think they should have to advocate for themselves anyway. They should have the needed support and resources to access safe and stable housing.

“When COVID hit it really inspired me and made me realize I could help other people,” Deajah said. “I did my own research. When you’re in foster care, the information you receive is often by word of mouth. But I wanted to find documented information.”

Deajah was in the midst of this personal project at the time she started with Evident Change. When her supervisor asked about her interests, she shared her project. It took off from there, she said.

She continued her research and, with her supervisor’s support, contacted the California Department of Social Services (CDSS) about her concerns. She recommended to CDSS that they increase their collaboration with affected youth to understand their experience of what was happening as counties and housing providers were struggling to implement the optional THP-Plus housing extensions allowable through AB79. Here was an example of the California legislature allowing critical extensions of housing for former foster youth—but too often the counties lacked the resources to successfully execute the extension, and youth were not made aware of this option.

“CDSS and county staff explained they don’t work with youth directly because of contracts they have with other organizations,” Deajah said. She was disappointed that the overall impact of state and county practice was a fragmented process, with missed opportunities to get input from the youth most affected by the legislation. Without state oversight, she noted, there was no way for youth to know if their county had implemented the extension, making it difficult for youth who were at risk of losing their housing to advocate for themselves effectively.

Still determined to help in some way, Deajah developed a flyer for former foster youth that includes information about the housing extensions along with resources for free cell phones, food assistance, and more. She distributed the flyer to county-level leadership in the area and asked them to share it with current and former foster youth. The resource is also housed here on the Evident Change website.

Deajah’s time as a youth advisor with Evident Change will wrap up in another month, but she hopes to continue her policy research and advocacy work on behalf of former foster youth. “I want people to understand that this is a critical issue,” she said. “Former foster youth don’t know about these resources. This is something we really need to get out to the people it will help.”

Debra Illingworth Greene is the communications manager at Evident Change.

When Deajah Nunn joined Evident Change as a youth advisor in 2020, she brought along her own interests and concerns as a former foster youth. Happily—for both Deajah and her colleagues—that’s exactly why she was here. Deajah was living in transitional housing for former foster youth (Transitional Housing Program-Plus, or THP-Plus) in the Bay Area…
We use cookies on our website to give you the most relevant experience by remembering your preferences and repeat visits. By clicking “Accept”, you consent to the use of ALL the cookies. However you may visit Cookie Settings to provide a controlled consent.
Cookie settingsACCEPT
Manage consent