Why I Wrote Privilege and Punishment

Why I Wrote Privilege and Punishment 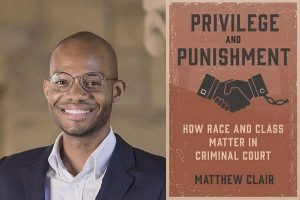 I wrote Privilege and Punishment: How Race and Class Matter in Criminal Court to understand and help to improve the lives of people who experience being processed as a defendant in our nation’s criminal courts. Over the past half century, the number of people arrested and processed in our nation’s courts has skyrocketed. State criminal courts process more than 17 million court cases per year. Although court processing—and other forms of legal control—are targeted at poor people of color, especially Black and Latino men with low levels of education, more privileged groups have also been pulled into the criminal legal system.

The book asks: What is it like to be processed in criminal court today, and how does it vary by race and class? To answer this question, I spent over four years conducting ethnographic fieldwork and in-depth interviews with defendants, public defenders, judges, prosecutors, and other court actors in the Boston, Massachusetts, court system. I followed a diverse group of people facing criminal charges—from an investment consultant and nurses to construction workers and people who are unhoused and unemployed.

For most defendants, the quality of their relationship with their defense attorneys is central to whether they feel the court process was fair and just. And the quality of the attorney-client relationship is rooted in race and class inequalities in broader society. The inequalities people experience in their everyday lives—in the schools they attended as kids, the neighborhoods they grew up in, their access to financial resources, their social ties with influential people, and their experiences with police violence—shape their relationships with their lawyers and, by extension, the court punishments they face.

Nearly everyone in the study, rich and poor alike, reported experiencing profound hardship in their adolescence, often coinciding with engagement in illegal activities such as drug dealing or illicit substance use. But the meaning and treatment of these illegal activities was unequal along race and class lines. Middle class and white working-class people (who I refer to as privileged) framed their engagement in criminalized activities as pleasurable diversions and experimentation. Indeed, drug dealing and drug use among the privileged were often overlooked by their parents and even the police. Meanwhile, the same behaviors among poor and working-class people of color (who I refer to as disadvantaged) were surveilled by police and understood as necessary in a context of racism and poverty.

Inequality followed them to court. In the rare instances when privileged people found themselves in court, their experience was far easier than that of the disadvantaged. One paradox I found was that although disadvantaged defendants often had greater knowledge of their legal rights—gleaned from prior experiences with the law or from vicarious experiences shared in their communities—and were often more actively engaged in trying to fight their cases, their self-advocacy was punished by the court process. Their defense attorneys—caught between the power and expectations of prosecutors and judges—coerced them to take pleas, silenced them in front of judges, and grew tired of defendants whom they felt had imprecise knowledge of court norms. Meanwhile, the privileged often reported feeling heard by their lawyers (who were often privately retained), and they felt respected by judges and prosecutors who afforded them opportunities for rehabilitation and treatment because they were perceived to be compliant.

These dynamics have important implications for how we understand the basic building blocks of race and class inequality in institutional interactions. Much of what we assume about the interactional dynamics of privilege in American society comes from research on mainstream institutions, such as schools and doctor’s offices. Scholars have shown that middle-class people tend to be assertive, demanding, and knowledgable in these spaces, whereas disadvantaged people are portrayed as deferential to authorities and rarely making demands for accommodations. In the courts, however, it is the disadvantaged who have greater knowledge of the law and seek to make demands by exercising their rights. Their relatively worse treatment arises from the different unwritten rules, expectations, and structural constraints of an unjust legal system.

Much of this book was inspired by, and written alongside, the Black Lives Matter movement. Today, in the wake of the killings and murders of Breonna Taylor, George Floyd, Tony McDade, Adam Toledo, and others, I see the research in Privilege and Punishment as contributing to efforts to transform not just policing but also the power and presence of the criminal courts in our society. In the book’s conclusion, I reflect on three levels of transformation required to bring about justice in the courts—from the level of the attorney-client interaction to the level of society, where we must rethink the way we deal with and prevent criminalized social problems and harms.

Matthew Clair is an assistant professor of sociology and law at Stanford University and the author of Privilege and Punishment: How Race and Class Matter in Criminal Court. The book is a finalist in the 2021 Media for a Just Society Awards. Watch this space for additional blog posts written by the creators of media chosen as finalists.

I wrote Privilege and Punishment: How Race and Class Matter in Criminal Court to understand and help to improve the lives of people who experience being processed as a defendant in our nation’s criminal courts. Over the past half century, the number of people arrested and processed in our nation’s courts has skyrocketed. State criminal…
We use cookies on our website to give you the most relevant experience by remembering your preferences and repeat visits. By clicking “Accept”, you consent to the use of ALL the cookies. However you may visit Cookie Settings to provide a controlled consent.
Cookie settingsACCEPT
Manage consent