Who Guards the Guardians?

Who Guards the Guardians? 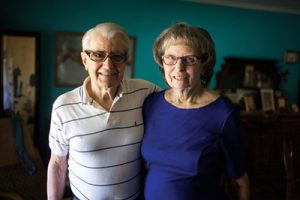 More than 53,000 people in Texas, and more than 1.5 million nationwide, live today under a court-ordered guardianship, with their basic rights—like deciding where they live, how they spend their money, and who they see—entrusted to someone else. It’s a tremendous power wielded by judges who must quickly untangle intra-family politics, and then monitor the guardianship for signs of neglect or abuse.

In practice it’s an impossible job, as I reported in a July 2016 story for the Texas Observer titled “Who Guards the Guardians?” The Texas Legislature gives courts nowhere near the funding necessary to track these cases, and only a few counties will make up the difference.

Rosamond Bradley struggled for years to regain her legal rights after her recovery from a mental health episode. Her letters to the Lubbock County judge who created her guardianship—an elected official without a law license—went unanswered for years; only with help from a team of advocates outside the county courthouse was Bradley able to have her rights restored. Her hand-written pleas to the judge, and the rare happy ending to her ordeal, is what led me to the story of Texas’ broken guardianship system.

Bradley’s case wasn’t simple: Her sons filed for a guardianship at a time when she did seem unable to make decisions for herself and when doctors recommended she be hospitalized. But after she recovered enough to live on her own again, she discovered there was nobody in the courthouse willing to help restore her legal rights. She was well enough to live independently, but the system remained a mystery to her and it took years to break free of the system.

Another case I learned about was more clear-cut: A man named Eric Watts saw a market in the growth of guardianships in Lubbock County and opened a business accepting court appointments as a private guardian. Watts became notorious around nursing homes in the Texas Panhandle for missing payments and generally neglecting the people in his care. After state regulators suspended Watts’s license, Lubbock judges had to reassign his cases and found only one other option in the rural county: Sarah Watts, Eric’s wife, who repeated her husband’s pattern of neglect for years until the state pulled her license, too.

While Lubbock’s problems with guardianship were especially dramatic, state court officials realized that they had no way of knowing whether the same horror stories were playing out in other counties unnoticed. I met with auditors who had just begun poring over guardianship files in county courthouses across the state; in one South Texas county, they discovered 90% of the guardianships were out of compliance with state law. Across the state, they found suspicious purchases; missing reports on an elderly person’s well-being; and letters to the court, like Bradley’s, that had been ignored.

While our story focused on Texas, guardianship abuse is a nationwide problem. Lawyers like Terry Hammond, an El Paso-based attorney who took on Rosamond Bradley’s case, advocate for a nationwide solution: streamlining probate law to make guardianship practices more uniform across the country, so fewer people slip through the cracks. Hammond and other experts I spoke with agree that weak guardianship oversight will become a bigger problem everywhere as the baby boom generation ages. In Texas from 2011 to 2015, the number of guardianships increased 60% while courts were given no more resources to handle the extra work.

Some states have made guardianship reform a priority. Minnesota, for one, has designed a system to alert judges when guardians’ reports are late or incomplete—signals of potential abuse or neglect.

Texas lawmakers responded to the Observer’s story with outrage, pledging funding to expand the audit statewide and implement a version of the Minnesota program. Through this year’s legislative session, guardianship reform looked like a rare problem that Texas lawmakers were willing to concede could only be fixed with more money. Advocates for reform were shocked when Governor Greg Abbott vetoed the additional funding in June, calling the $5 million allocation “unnecessary bureaucracy and unnecessary spending.”

Just as the state seemed ready to grapple with the hidden risk to its most vulnerable citizens, Abbott’s veto cut the audit short. Until state officials are willing to restart the effort, there’s just one thing we’ll know for sure: Texans will keep aging and the state’s guardianship problem will continue to grow.

Patrick Michels, a former Observer staff writer, is a reporter at the Center for Investigative Reporting.

More than 53,000 people in Texas, and more than 1.5 million nationwide, live today under a court-ordered guardianship, with their basic rights—like deciding where they live, how they spend their money, and who they see—entrusted to someone else. It’s a tremendous power wielded by judges who must quickly untangle intra-family politics, and then monitor the…
We use cookies on our website to give you the most relevant experience by remembering your preferences and repeat visits. By clicking “Accept”, you consent to the use of ALL the cookies. However you may visit Cookie Settings to provide a controlled consent.
Cookie settingsACCEPT
Manage consent