What I Learned From “What We Know”

What I Learned From “What We Know” 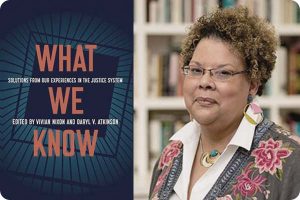 People who live with the burden of criminal conviction don’t usually have the opportunity to demonstrate our human value to the society whose justice system deemed us unfit to live among them. Each one of us has a history. We have thoughts and ideas for the future and a vision of what might be possible if the nation made mass investments in building safe, healthy communities for everyone. For well-known and lesser-known reasons, many of us lived as outsiders long before ever being accused of a crime. Often saddled with labels that position us as problematic, there is wall of truth between us and our allies. We are the contemporary embodiment of the haunting unasked question W.E.B. Dubois refused to answer: How does it feel to be a problem?

Scholars, politicians, and practitioners have realized that the US criminal legal system cannot sustain the growth rate initiated by the media-heightened wars on poverty, crime, and drugs. Over time the sheer number of people with criminal convictions (nearly 100 million in the United States) has forced the rhetoric of crime, punishment, and second chances to unite with the language of social justice across all public policy. In 2018, when demand for system reform was rising, bi-partisan calls for decarceration inspired What We Know: Solutions from Our Experiences in the Justice System.

In What We Know, people currently or previously incarcerated offer policy or program proposals and share their connection to the idea. Co-editor Daryl V. Atkinson and I—both of us with lived experience in the justice system—approached the project believing that the thoughtfulness of these essays would generate new thinking and demonstrate that underestimating the potential of every human being causes missed opportunities to build resilient communities.

What We Know shares diverse perspectives and reveals that people most affected by the criminal legal system do not envision system transformation to be as simple as opening the prison gates and shuttering police precincts. That is not to say that we unanimously advocate reform over decarceration. Dreams of a world in which imprisonment is not the response to human struggles hover over the entire text. In the meantime, the authors plead for relief from conditions of incarceration and collateral consequences of a conviction. The proposals vary widely, but the themes of fairness, education and employment, racial justice, and compassion appear consistently.

Contributors describe fairness as equal accountability for all and believe that responsibility should match the measure of harm. One essay recommends independent oversight of all justice practitioners and administrators so that the system is as accountable for its actions as convicted people are for the injury they caused. When the loss of freedom is not sufficient punishment, and added deprivation is not seen as vindictive and unfair, the principle of fairness is betrayed. Sanctions that do not negatively impact public safety—voter disenfranchisement, denied education, free labor, family separation, substandard nutrition, medical care—are all punitive excess.

In addition to being fair, the book suggests that education and employment are pathways to opportunity and full citizenship. One contributor highlights the value of civic education. Others point to academic or vocational training and emphasize that a living wage has benefits beyond earnings; it boosts self-respect and dignity. An educated and meaningfully employed population benefits all of society.

The authors also understand that the criminal legal system is historically linked to backlash against post-civil war reconstruction. Transformation of the system will require accountability to that history. Racial disparity permeates the system. That reality is an undercurrent throughout the submissions we reviewed for What We Know.  One author calls for eliminating the 13th amendment exception, a clause that permits the state to enslave convicted criminals. The existence of the 13th amendment exception ironically aside, the authors of What We Know still put forward a request for the system to exercise compassion. They ask that people with mercilessly long sentences be released from prison after a maximum of 20 years of good time. There is also an appeal to governors and presidents to expand their power to free the infirmed, the elderly, and people convicted of non-violent crimes.

It is impossible to read the essays in What We Know and believe that the system only confines people who threaten public safety. We know that not all crimes are prosecuted and punished. We know that sentences to multiple lifetimes of imprisonment are excessive. We know that defendants across race, economic status, and gender identity are not treated equally.

During the current social upheaval, the nation is threatening retreat from a new vision for justice. Under these conditions, I was surprised that What We Know received the 2021 Distinguished Achievement Award from Evident Change. The goal of the publication was to let contributors propose their ideas, show a range of thinking among a population that is often stereotyped, and showcase voices that are rarely heard. Recognition by Evident Change let us know that we accomplished what we set out to do.

Vivian D. Nixon is Writer in Residence at Square One, a project of the Columbia Justice Lab. She and co-editor Daryl V. Atkinson received the 2021 Distinguished Achievement Award for their book of essays, What We Know: Solutions from Our Experiences in the Justice System. See the full list of Media for a Just Society Award winners on our website.

People who live with the burden of criminal conviction don’t usually have the opportunity to demonstrate our human value to the society whose justice system deemed us unfit to live among them. Each one of us has a history. We have thoughts and ideas for the future and a vision of what might be possible…
We use cookies on our website to give you the most relevant experience by remembering your preferences and repeat visits. By clicking “Accept”, you consent to the use of ALL the cookies. However you may visit Cookie Settings to provide a controlled consent.
Cookie settingsACCEPT
Manage consent