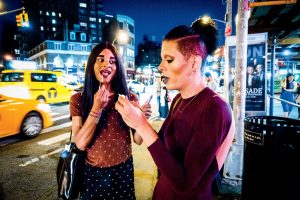 More than 11,000 transgender youth ages 18 to 24 live in New York City, and at least 15% of them are homeless. Nationally, a third of 1.4 million transgender Americans report experiencing homelessness at some point in their lives; on average, they are 13 years old when they first spend a night on the streets.

“Trans, Teen and Homeless: On the Streets of New York With America’s Most Vulnerable Population” is a story about six young transgender women struggling to survive.

This story began with a conversation I had in early 2016 with a source from the New York City Department of Health. I have a background in public health, specifically HIV/AIDS prevention, and when I inquired about HIV transmission rates, my source disclosed that rates were highest among young Black and Latina trans women. I wanted to know why.

I spent seven months reporting on the ground, slowly cultivating trust with homeless trans youth I met in subway stations, clubs, drop-in centers, and working on street corners. Ultimately, I focused on a group of six friends, all of whom had been kicked out or ran away from their homes and were in the process of transitioning on the street. One of the young women I followed had been kicked out when she was 14.

I wanted to understand the extent of the barriers they faced because of institutionalized transphobia and to bear witness to the daily challenges of surviving on the streets while transitioning without resources. To get beyond the numbers, this story required spending an extraordinary amount of time with them, learning how they manage the deep complexities of being homeless, adolescent, and transgender. Reporting on every aspect of their lives included long nights observing them trade sex for shelter on the stroll, hanging out in city parks where they regularly slept, attending group dinners and appointments at youth support centers, and documenting every minute they spent resting on the subway.

The resulting detailed portrait of a too-often overlooked community helped uncover institutional shortcomings that dictate much of their daily lives. Even though New York is a right-to-shelter city, legal protections don’t apply to youth-specific shelter beds. Even if trans youth are lucky enough to secure an emergency shelter placement, beds are often time limited—typically 30 or 60 days—and only available to those under age 21. Additionally, youth often lose their beds for small infractions, like missing curfews, arguing with staff, or exceeding shower time limits. Seventy percent of them also report being harassed or physically and sexually assaulted in a shelter. For homeless transgender youth, the city’s byzantine shelter system is often a source of greater instability, rather than a safe space to begin the process of rebuilding their lives.

I also witnessed the severe personal risks these six women face on the streets: arrested for peeing in public, re-tucking their genitals, jumping turnstiles, and shoplifting—charges that led to terrifying stays in the city’s jail system, where most of them are housed in the male population. Homeless trans youth are also routinely denied access to public restrooms that correspond to their identified gender. They stay in abusive relationships to maintain a predictable place to sleep. Without access to appropriate medical coverage, many young trans women begin their transitions on the street, injecting black-market hormones and sometimes electing for silicone injections from underground “pumpers” to add more feminine curves. These procedures are not simply cosmetic: Trans women who don’t pass as their identified gender face greater risks of violence.

Significantly, this reporting led to real governmental change. In the weeks after the story published, the New York City Council held a four-hour hearing on youth shelters. Council members demanded accountability from the Department of Youth and Community Development (DYCD) and introduced new legislation that would require annual reports from DYCD; mandate the agency provide shelter to all runaway and homeless youth; extend the time youth are allowed to retain a shelter bed; and force all youth shelter beds be available for youth up to age of 25, in accordance with federal guidelines.

“Trans, Teen and Homeless” brought a marginalized population to life on the page, and the resulting account of systematic failures—supported with hard data and the testimony of experts—is what ultimately forced local government to act.

Laura Rena Murray’s article, chosen as a finalist in the Print/Online Journalism category, was published in Rolling Stone. Murray is an independent investigative journalist based in the San Francisco Bay Area.

More than 11,000 transgender youth ages 18 to 24 live in New York City, and at least 15% of them are homeless. Nationally, a third of 1.4 million transgender Americans report experiencing homelessness at some point in their lives; on average, they are 13 years old when they first spend a night on the streets….
We use cookies on our website to give you the most relevant experience by remembering your preferences and repeat visits. By clicking “Accept”, you consent to the use of ALL the cookies. However you may visit Cookie Settings to provide a controlled consent.
Cookie settingsACCEPT
Manage consent