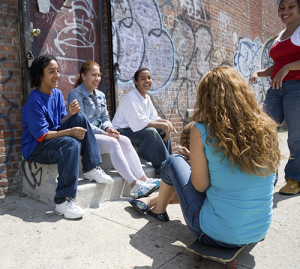 Incarcerating youth in adult jails and prisons is the most expensive option for the juvenile justice system and unfailingly produces the worst results. While an estimated 200,000 youth under age 18 are prosecuted, sentenced, and incarcerated in the adult system each year—and a staggering 100,000 are held in adult jails and prisons annually—states are moving the dial toward improving these systems. Despite the fact that many of the state laws were intended to prosecute the most serious offenders, most youth in the adult criminal justice system are there for nonviolent, minor offenses.


Incarcerating youth in adult jails and prisons is the most expensive option for the juvenile justice system and unfailingly produces the worst results. While an estimated 200,000 youth under age 18 are prosecuted, sentenced, and incarcerated in the adult system each year—and a staggering 100,000 are held in adult jails and prisons annually—states are moving the dial toward improving these systems. Despite the fact that many of the state laws were intended to prosecute the most serious offenders, most youth in the adult criminal justice system are there for nonviolent, minor offenses. Additionally, of those youth convicted as adults, a whopping 80% are released from prison before they reach age 21, and 95% are released before age 25.

Determining that these “get-tough” policies did not achieve the desired public safety outcomes, such as lowering recidivism rates, 23 states have passed more than 40 pieces of legislation to remove youth from the adult criminal justice system in the last eight years. For example, in the past three years, 11 states (Colorado, Hawaii, Idaho, Indiana, Maine, Nevada, Virginia, Ohio, Oregon, Pennsylvania, and Texas) passed laws to limit the state’s authority to house youth in adult jails and prisons; and 11 states (Arizona, Colorado, Connecticut, Delaware, Illinois, Maryland, Nevada, Ohio, Utah, Virginia, and Washington) also changed their transfer laws, making it more likely that youth will stay in the juvenile justice system.

States were able to move forward in reform efforts through sound research and data. The US Department of Justice, the Centers for Disease Control and Prevention, and the Brookings Institute have all issued reports over the past few years showing that transfer does not work to reduce juvenile crime. In addition, the recidivism research showing that youth are more likely to re-offend when prosecuted in adult criminal court has played a key role in understanding how public safety is affected when kids are prosecuted as adults. Armed with this data and research, bipartisan policy makers from all regions of the country enacted laws that reflect what we all know: Youth are different from adults and should have a fair chance at rehabilitation. With juvenile arrest rates decreasing rapidly and states investing in strategic juvenile justice reform efforts, now is the time to push for all youth to be placed in appropriate juvenile justice settings.

One of the most important and comprehensive reforms to remove young people from the adult criminal system is raising the age of juvenile court jurisdiction. In 2007, Connecticut passed legislation to change the age that young people may remain in the juvenile justice system from 16 to 18. In the past year, both Illinois and Massachusetts have enacted legislation to raise the age of juvenile court jurisdiction from 17 to 18. Currently, only two states—New York and North Carolina—automatically prosecute all 16- and 17-year-olds as adults. Eight other states—Georgia, Louisiana, Michigan, Missouri, New Hampshire, South Carolina, Texas, and Wisconsin—have set 17 as the age of adult criminal responsibility.

Campaigns to raise the age of juvenile court jurisdiction in these states have gained tremendous momentum in the past few years. For example, in New York State, Governor Andrew Cuomo recently announced that he will appoint a high-level commission to develop a road map for raising the age of criminal responsibility in New York. Advocates are working to ensure that reform efforts include continued improvements to the juvenile justice system so that minor cases are diverted from arrest or court and communities and juvenile courts have the necessary resources to provide age-appropriate and effective services and supports to all young people involved in the justice system.

The good news is that as states have dramatically reduced the number of young people in juvenile detention centers and placement facilities, most states have also made significant progress in removing young people from adult jails and prisons. These deincarceration trends have resulted in a win-win situation not only for young people and their families, but for society as a whole.

Mishi Faruqee is the juvenile justice policy strategist for the national American Civil Liberties Union (ACLU). In this role, she works with state ACLU affiliates to promote juvenile justice reform. Ms. Faruqee has nearly 20 years’ experience leading advocacy campaigns and coalitions working for criminal justice and juvenile justice reform. Prior to joining the ACLU, she worked at the Correctional Association of New York for 10 years, served as the director of Youth Justice Programs at the Children’s Defense Fund-NY, and was a senior advisor to the commissioner at the New York City Department of Probation. Ms. Faruqee also served on former New York Governor Paterson’s Task Force for Transforming Juvenile Justice and on New York’s Juvenile Justice Advisory Group.

Carmen Daugherty is policy director for the Campaign for Youth Justice, where she assists both state-based organizations and national partners in developing policy goals related to criminal justice reform. Before coming to the Campaign, Ms. Daugherty served as deputy director and staff attorney for Advocates for Justice and Education, a DC-based nonprofit formed to educate parents, youth, and the community about the laws governing public education, specifically for children with special needs. In 2008, she was appointed to the DC Mayor’s Juvenile Justice Advisory Group; she also co-chairs the American Bar Association, Individual Rights and Responsibilities, Public Education Committee.

Incarcerating youth in adult jails and prisons is the most expensive option for the juvenile justice system and unfailingly produces the worst results. While an estimated 200,000 youth under age 18 are prosecuted, sentenced, and incarcerated in the adult system each year—and a staggering 100,000 are held in adult jails and prisons annually—states are moving…
We use cookies on our website to give you the most relevant experience by remembering your preferences and repeat visits. By clicking “Accept”, you consent to the use of ALL the cookies. However you may visit Cookie Settings to provide a controlled consent.
Cookie settingsACCEPT
Manage consent