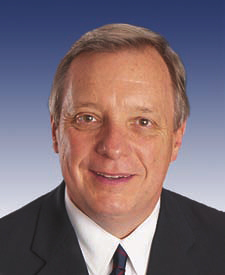 This blog is excerpted from the opening statements of Senator Dick Durbin given at a hearing before the Senate Committee on the Judiciary Subcommittee on the Constitution, Civil Rights, and Human Rights.

America has led the fight for human rights around the world. This subcommittee has tried to play a part in this effort, holding the first Congressional hearings on issues like rape as a weapon of war and passing legislation like the Genocide Accountability Act.

This blog is excerpted from the opening statements of Senator Dick Durbin given at a hearing before the Senate Committee on the Judiciary Subcommittee on the Constitution, Civil Rights, and Human Rights.

America has led the fight for human rights around the world. This subcommittee has tried to play a part in this effort, holding the first Congressional hearings on issues like rape as a weapon of war and passing legislation like the Genocide Accountability Act.

But we also have an obligation to look in the mirror and consider our own human rights record. Today in the United States, more than 2.3 million people are imprisoned. This is, by far, the highest per capita rate of prisoners in the world. And African Americans are incarcerated at nearly six times the rate of whites, while Hispanics are incarcerated almost twice as much. These numbers translate into human rights issues that we cannot ignore.

That is why I held a hearing on mental illness in prison in 2009. That is why I authored the Fair Sentencing Act, which reduces the sentencing disparity between crack and powder cocaine.

And that is why we are here today. This is the first-ever Congressional hearing on “solitary confinement,” also known as supermax housing, segregation, and isolation, among other names.

“The cells are windowless; the walls are white concrete. …The overall effect is one of stark sterility and unremitting monotony. Inmates can spend years without ever seeing any aspect of the outside world except for a small patch of sky. One inmate fairly described [it] as being ‘like a space capsule where one is shot into space and left in isolation.’”

Imagine spending 23 hours a day in a cell like that—for days, months, years—with no window to the outside world and very little, if any, human contact.

The United States holds far more prisoners in solitary than any other democratic nation. The Bureau of Justice Statistics found that in 2005, US prisons held 81,622 people in some kind of restricted housing. In my home state of Illinois, 56% of the prison population has spent time in segregation.

We did not always use solitary confinement at such a high rate. But in the 1980s, states began creating expensive “supermax” prisons designed to hold people in isolation on a mass scale. These supermaxes, just like the crack cocaine sentencing laws, were part of the tough-on-crime policies that seemed to make sense at the time.

But we now know that solitary confinement is not just used for the worst of the worst. Instead, we are seeing an alarming increase in isolation for those who do not need to be there—and for vulnerable groups like immigrants, children, LGBT inmates—supposedly for their own protection.

That is why I advocated for a change in the Justice Department’s prison rape standards, to help ensure that sexual assault victims are only placed in solitary when absolutely necessary. And you heard from Nicole Miera about the tragic consequences of locking up children in isolation. That is why the American Academy of Child and Adolescent Psychiatry has called for a ban on solitary confinement for children under 18. In January, I visited an immigration detention center in Illinois and saw segregation units like those found at any county jail—for people who have not been convicted of any crime.

Even for adults convicted of serious crimes, experts say far too many are in solitary confinement. Some are already seriously mentally ill and require intensive monitoring and treatment—the exact opposite of isolation. Others who may not have any psychological problems before isolation can become psychotic or suicidal. And there is also the more basic question of how prisons treat people in solitary. Their conditions of confinement need to meet basic standards of decency.

As far back as 1890, the Supreme Court recognized the risks of solitary, describing the isolated inmates at one prison this way:

“A considerable number of the prisoners fell, after even a short confinement, into a semi-fatuous condition, from which it was next to impossible to arouse them, and others became violently insane; others still, committed suicide.”

And our colleague and former POW John McCain said, “It’s an awful thing, solitary. It crushes your spirit and weakens your resistance more effectively than any other form of mistreatment.”

Solitary confinement is also extremely costly. For example, Tamms Correctional Center, Illinois’s only supermax prison, has by far the highest per prisoner cost of any Illinois prison—$61,522 in Fiscal Year 2010—as compared to an average of $22,043 for other prisons. (Tamms was closed in 2013, after this hearing took place.)

A number of states are starting to reassess solitary confinement. They have implemented reforms and reduced the use of solitary, lowering prison violence and recidivism rates, and saving millions of dollars.

As a result of the work we have done preparing for this first-of-its-kind hearing, I am working on legislation to encourage reforms in the use of solitary confinement. We can no longer slam the cell door and turn our backs on the impact our policies have on the incarcerated and the safety of our nation.

Senator Dick Durbin, a Democrat from Springfield, is the 47th US Senator from the State of Illinois, the state’s senior senator, and the convener of Illinois’ bipartisan congressional delegation.

This blog is excerpted from the opening statements of Senator Dick Durbin given at a hearing before the Senate Committee on the Judiciary Subcommittee on the Constitution, Civil Rights, and Human Rights. Tuesday, June 19, 2012 America has led the fight for human rights around the world. This subcommittee has tried to play a part…
We use cookies on our website to give you the most relevant experience by remembering your preferences and repeat visits. By clicking “Accept”, you consent to the use of ALL the cookies. However you may visit Cookie Settings to provide a controlled consent.
Cookie settingsACCEPT
Manage consent