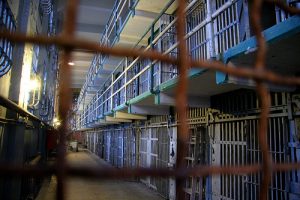 This post by NCCD’s Caroline Glesmann and Chris Hartney, co-authors of our new report “Prison Bed Profiteers: How Corporations Are Reshaping Criminal Justice in the U.S.,” is a guest entry for Ella’s Voice, Ella Baker Center’s online blog.

This post by NCCD’s Caroline Glesmann and Chris Hartney, co-authors of our new report “Prison Bed Profiteers: How Corporations Are Reshaping Criminal Justice in the U.S.,” is a guest entry for Ella’s Voice, Ella Baker Center’s online blog.

Reported crime is at the lowest level in decades, safe alternatives to incarceration are an accepted part of the corrections system, and private prisons – which now house 8% of all U.S. inmates – haven’t provided the cost savings and improved conditions of confinement promised by proponents. Nevertheless, business is booming for companies that run prisons for a profit.

The major for-profit prison corporations are Corrections Corporation of America (CCA) and GEO Group. Each manages about 65 U.S. correctional facilities. In 2011, the combined revenues of CCA and GEO totaled over $3 billion.

Prisons are challenging enough for the public sector or well-intentioned nonprofits to manage. When profit-driven corporations run correctional facilities, that challenge increases exponentially – often due to cost-cutting at the expense of inmate, staff, and public safety.

It’s not difficult to find negative accounts about conditions in profit-driven prisons. Until recently, GEO managed Mississippi’s Walnut Grove Youth Correctional Facility. A U.S. Department of Justice investigation found “systemic, egregious, and dangerous practices” at Walnut Grove, with “deliberate indifference” to staff’s sexual misconduct with youth, staff’s gang affiliations, victimization between youth, and more. GEO has since lost its contract for this facility.

On the adult side, the abuses experienced by inmates at for-profit prisons are extensive. Operated by CCA, the Idaho Correctional Center (ICC) was nicknamed the “Gladiator School” due to its extremely violent environment. A 2010 lawsuit  brought by the ACLU of Idaho described ICC’s culture as relying on “degradation, humiliation, and subjugation of prisoners” and “violence as a management tool.”

The conditions at immigration detention centers operated by for-profits are equally troubling, especially given estimates that about half of all immigrant detainees are held in private facilities. In 2007, a detainee at the CCA-managed Elizabeth Detention Center in New Jersey suffered a head injury that went untreated for over 13 hours. He later died from his injuries. In 2011, the ACLU of Texas filed a lawsuit on behalf of immigrant women who were sexually assaulted by staff while being detained at the CCA-run T. Don Hutto Residential Center.

Despite these issues, prison companies are still able to fill prison beds, in part by influencing pro-incarceration state legislation. This includes three strikes laws and, more recently, anti-immigrant laws such as Arizona’s SB 1070, which greatly increased law enforcement’s options to detain anyone thought to be an undocumented immigrant. The majority of SB 1070’s 36 co-sponsors received contributions from prison lobbyists or prison companies.

Higher recidivism and lengthier sentences can also increase prison companies’ profits. For-profit prison companies claim they can respond to prison overcrowding more quickly and more cheaply than public agencies can, though neither claim has been consistently proven true in practice. Further, this tactic diverts time and resources from pursuing permanent corrections reform. Research indicates that neither incarceration nor longer prison sentences have a strong correlation with reduced recidivism.

Alternatives to detention and incarceration (e.g., community corrections, electronic monitoring, day and evening reporting centers, and restorative justice) should continue to be explored, rather than building new prisons or staffing existing facilities. These alternatives can reduce the demand for prison bed space without jeopardizing public safety.

The private prison industry will continue to pursue its agenda of fattening shareholders’ bank accounts. Anti-privatization proponents can counteract that agenda by supporting sentencing reforms that limit incarceration; educating communities and policymakers about private prisons; and advocating for laws and regulations that will improve contracting practices, increase transparency in private prison companies’ business practices, and establish effective monitoring and oversight of private prisons.