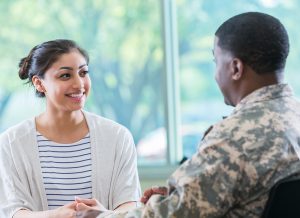 In early August, my colleague, Miguel Becerra, and I will present a paper at the Society for the Study of Social Problems annual meeting in New York. In our paper, we use qualitative interviews and focus groups—alongside a 1950’s core sociology theory—to make sense of how parents manage the impressions they make on child welfare workers. We also consider how parents benefit from participating in social services, which can implicitly provide coaching about self-presentation as well.

Erving Goffman’s dramaturgical theory, which uses the metaphor of a stage to understand everyday social interactions, is surprisingly relevant when thinking about the self-presentation skills parents need to persuade workers that they are capable of safely reunifying with their children. Goffman (1959)1 used the stage for explaining how social interactions are conditioned by a need to manage impressions, and as Goffman’s theory suggests, parents must be mindful of both their verbal presentation and any non-verbal cues they display. This is because non-verbal cues may be seen as indicators of who the parents truly are, particularly if those cues do not align with the parents’ narrative about why their children should be returned. For example, following Goffman, if a parent verbally presents evidence of compliance with attending substance abuse treatment but appears agitated and emotionally unregulated, the worker is likely to suspect that the behavior is the “true” version of the parent.

Fundamental to our thinking is that child welfare offices are grounded in white, middle-class norms. While families may present themselves perfectly well in their own communities, they have to do the same in the child welfare context. For example, professional office culture has a number of implicit rules about what emotions are acceptable to show and who may show them. Consider anger, which is not surprisingly a common emotion in parents who have been investigated by child welfare. Research shows that anger is generally acceptable in professional settings only if displayed by someone who occupies a position of dominance by virtue of their role (e.g., boss) and their social position in society (e.g., a white man).

In the context of child welfare, where the social worker must determine whether the parent is able and willing to make changes to address the agency’s concerns, anger is disquieting and may call into question the parent’s willingness to defer to the agency.2 This may be even more salient if the parent is a woman or a person of color, as the right to show emotion without repercussions is tied to overall social status.3 The ability to contain anger in front of social workers, or on what we term the “child welfare stage,” thus becomes an important strategy for families in the child welfare system who are seeking to reunify.

While our research focused primarily on parenting education, myriad programs for parents in the child welfare system target the failure to regulate emotions. This brings up the question of whether these programs are effective in whole or in part because of what they teach parents about how to interact with social workers, along with what the parents learn about interacting with their children.

In early August, my colleague, Miguel Becerra, and I will present a paper at the Society for the Study of Social Problems annual meeting in New York. In our paper, we use qualitative interviews and focus groups—alongside a 1950’s core sociology theory—to make sense of how parents manage the impressions they make on child welfare…
We use cookies on our website to give you the most relevant experience by remembering your preferences and repeat visits. By clicking “Accept”, you consent to the use of ALL the cookies. However you may visit Cookie Settings to provide a controlled consent.
Cookie settingsACCEPT
Manage consent