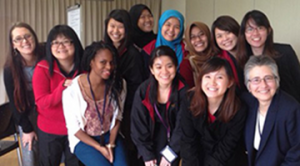 A photograph of a great gray owl that made local headlines earlier this year for its rare appearance near Madison, Wisconsin, now hangs on the wall of the Child Protection Service (CPS) meeting room in Singapore.

A photograph of a great gray owl that made local headlines earlier this year for its rare appearance near Madison, Wisconsin, now hangs on the wall of the Child Protection Service (CPS) meeting room in Singapore.

Captured by Wisconsin photographer Jim Stewart, the owl photo was a gift to CPS, a service of the Singapore Ministry of Social and Family Development, from NCCD staff who traveled to Singapore in November. The trip kicked off the first round of workgroups in the process of adapting the Structured Decision Making® (SDM) model for Singapore.

While gifting to clients is not routine for NCCD, the practice of exchanging gifts when doing business is part of many Asian cultures; NCCD’s Madison office is now graced with a plaque of the Singapore skyline, a gift from the ministry. Raelene Freitag, director of the NCCD Children’s Research Center (CRC) and international projects at NCCD, came up with the idea for the owl photo after seeing a display of Stewart’s photos, including the owl, at a Madison restaurant.

“I thought it would make a good corporate gift because it was local to CRC’s office and was a symbol of wisdom, which is what we all must bring to the work of designing SDM® systems,” Freitag said. “And it is a shared wisdom—we bring what we know, and the jurisdiction brings what they know. Designing SDM systems impacts children and families, and they deserve the best wisdom we can bring to our work.”

This new partnership is the result of a national review of CPS that took place in 2010 and 2011. The need for both a common assessment framework and risk classification instruments was determined at that time.

“The exploration with NCCD began in late 2011 and quickly progressed to a keenness to develop the partnership and jointly work on a common agenda for child protection,” said Tabitha Ong Yen Ping, senior assistant director of CPS in Singapore. “With SDM, the ministry hopes to promote a unifying framework across the child protection sector to better support the decision-making process within CPS and contribute to a shared ownership amongst stakeholders in the management of child protection in Singapore.”

NCCD staff members who traveled to Singapore are currently compiling the material developed with ministry staff; representatives from the departments of health, education, and police; and social service sectors. The material will be sent back to Singapore for more work by their partners before another trip in March for a second round of workgroups. This will be followed by a 90-day field test and one final round of workgroups to finalize the Singapore versions of the first set of SDM assessments. Through all of these steps, the owl will serve as a constant reminder to strive for wisdom.

Reflecting on the November trip, Aishatu Yusuf, program associate with NCCD, said, “I think everyone was open to sharing their knowledge and everyone was open to receiving others’ wisdom. I left with an abundance of knowledge regarding the Singapore jurisdiction that I didn’t arrived with. That was because we understood we were going into an unfamiliar jurisdiction and one of our biggest goals was to set up an SDM system based on their cultural experiences, not on what we’re used to seeing in a jurisdiction. They were empowered to do their own work and share their own experiences based on what they do and what they see and know.”

“The wisdom of the workgroup participants was evident, and watching the expression of that wisdom unfold and form into something new was a great honor and a joy,” added Heather Haberman, also an NCCD program associate. “There were moments when I felt giddy with what I saw unfolding and felt excitement in thinking ‘I can’t wait to see what happens with that amazing idea,’ only to look up and see the same look of giddiness on the faces of my colleagues. We don’t experience those moments every day. They are rare. So when they are seen, much like observing an owl flying overhead, one can only stop and appreciate the majesty of what is happening before one’s eyes.”

NCCD’s gift appears to have transcended any cultural differences that may exist between Singapore and the United States. Following the trip, Freitag received a thank you note for the photo from Ong Yen Ping, along with another note she had drafted to explain the photo to others, which reads:

“The owl is widely regarded in modern culture as a symbol of wisdom. This owl marks the beginning of the collaboration between Child Protection Service, Ministry of Social and Family Development (MSF), Singapore and Children’s Research Centre, NCCD, USA, in co-creating the Structured Decision Making system (SDM), Singapore version, to enhance decision-making and child protection practice in Singapore.

This picture symbolises the merging of wisdom and goodwill. It brings together two agencies from two different parts of the world, coming together for a common purpose and bringing with them courage, practice, wisdom, and the ability to appreciate and adapt the SDM to local societal norms and culture. It also marks the commitment to research, evidence-based practices and contribution to the success of each other.”

Debra Greene is an Editor at NCCD.