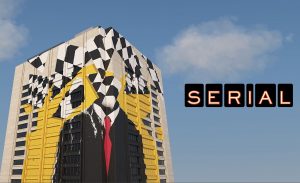 For Serial: Season Three, producer Emmanuel Dzotsi and I spent more than a year in Cleveland’s criminal courthouse watching ordinary cases, the unflashy proceedings reporters don’t usually pause over: marijuana possession, assault, disorderly conduct. The result was a nine-part series that doesn’t include any trials—no surprise testimony, no smoking guns, no rousing closing statements. Instead, through interconnected stories, we began to understand the racially inflected machinery of a system built to process plea bargains.

We wormed our way into courthouse spaces rarely seen by outsiders, including judges’ chambers and prosecutors’ offices, and the back hallways where plea deals are negotiated. And then we followed the cases back out into the neighborhoods that are most heavily policed and prosecuted. That’s when we saw most clearly how the criminal justice system infiltrates people’s daily lives and inspires profound distrust of law enforcement.

I didn’t plan on covering any juvenile cases. I thought the adult system would tell us everything we needed to know about why so many people working and living in the system say it’s broken. But then a story about a young guy named Joshua came my way and became the subject of the final two episodes. It’s the story that hit me the hardest.

Joshua had been busted for a couple of armed robberies he committed when he was 15 years old. In exchange for “juvenile life,” meaning he’d stay in the juvenile system until he was 21 rather than being tried in adult court, Joshua agreed to plead guilty and to cooperate with the cops and prosecutors, who were trying to build a case against a gang Joshua was involved with. It’s pretty rare for someone to cooperate to the extent Joshua did, mostly because it’s incredibly dangerous. And sure enough, Joshua was labeled a “snitch” and spent years under attack in Ohio’s juvenile prisons. When he first told me what was going on, I couldn’t understand why the system wasn’t protecting him. He had helped them, enormously. In addition, Ohio’s juvenile prison system had undergone massive restructuring and had been praised nationally as a model for reform. But what Joshua was describing to me in daily phone calls was chaos and dysfunction.

Ohio Department of Youth Services (ODYS) wouldn’t let me interview anyone who worked for the department or its facilities, but I managed to talk to current and former guards, social workers, and incarcerated youth, who told me vivid stories of corruption and abuse involving guards and gang members. It wasn’t one or two instances; it was widespread. My reporting showed that the state was harming children, which sounds over the top, but it’s true.

I figured once these episodes aired there would be public outcry. And yet … nothing. Other aspects of the series had impact and brought change, and that made us feel great. But apparently, Ohio isn’t sweating the juvenile stuff. At a legislative hearing in Columbus last year, ODYS was presenting its budget and a lawmaker from Cleveland said to the new ODYS director, Uh… I’m not sure if you listened to Serial, but what they reported was “disturbing, to say the least.” She asked him, “Is it true?” And if so, what are you doing about it? And the new director said yes, he had heard the podcast, and that the problems we brought up are things they think about and would be of concern “to any facility.” But his parting shot was this: “It certainly painted one picture that, um, provided a lot of entertainment value, but did not depict the conditions within our facility.”

I found this enraging. Because it’s nonsense, and Ohio knows it. But there’s no powerful constituency fighting for these incarcerated kids, so there’s little pressure on the government to do better. The youth I talked to wanted to tell me what was going on inside, how impossible it was for them to stay out of harm’s way inside these facilities. They wanted to tell me because they wanted people on the outside to hear what was happening to them and to do something about it. But the responsible adults who heard their harrowing experiences have left them out to dry. There’s nothing entertaining about that.

Criminal justice reporting is often (always?) distressing. But the good news is that reform is happening, creeping forward far slower than I’d like, but still, it’s happening. People all over the country have realized we’ve put way too many people in prison. That we’re judging and punishing people too harshly and for the wrong things. It’s finally dawning on us that our vote for county prosecutor matters. Journalism has a lot to do with that, so we must keep at it. Even at my grumpiest and most discouraged, I know what we do matters.

Sarah Koenig, host and executive producer, and Emmanuel Dzotsi, reporter and producer, received the 2019 Media for a Just Society Award in the radio category for Serial: Season 3, a podcast from the creators of This American Life. Learn more about the photo (above) of the courthouse in which most of the season took place—a still from a series of animations created for the Serial website and Season 3—here.

For Serial: Season Three, producer Emmanuel Dzotsi and I spent more than a year in Cleveland’s criminal courthouse watching ordinary cases, the unflashy proceedings reporters don’t usually pause over: marijuana possession, assault, disorderly conduct. The result was a nine-part series that doesn’t include any trials—no surprise testimony, no smoking guns, no rousing closing statements. Instead,…
We use cookies on our website to give you the most relevant experience by remembering your preferences and repeat visits. By clicking “Accept”, you consent to the use of ALL the cookies. However you may visit Cookie Settings to provide a controlled consent.
Cookie settingsACCEPT
Manage consent