Only a Mile and a Big World Apart

Only a Mile and a Big World Apart 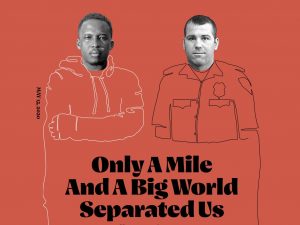 “Only a Mile and a Big World Separated Us” tells the story of two kids from the east side of Baltimore. The first is me, a Black guy who grew up in a drug family in a rough neighborhood and ended up selling drugs. The other is Daniel Hersl, a white guy, who grew up a mile away from me in a white working-class neighborhood and ended up being a cop. I am now a college professor, TV writer, and bestselling author. Hersl is doing 18 years in federal prison.

“Only a Mile” was the most difficult essay I’ve ever written. I’ve been consistently publishing essays since 2014, with over 500 pieces floating around the internet, and nothing I have written in my career has come close to “Only a Mile.”

Most of my work to date has been based on my own opinion and analysis about what I think needs to be done to move forward on many of the issues we face in society. I see a problem, use history as a tool to dig up its origin, and then dive straight into problem-solving mode. And that was my initial approach when I pitched “Only a Mile.”

Initially the essay was at The New York Times Magazine, where an excited editor heard about my experiences with the Baltimore Police Department’s own resident misfit, Hersl. The editor was blown away by the number of times this crooked guy and I crossed paths and wanted me to compare our lives. That editor didn’t know that the magazine had an upcoming essay on Baltimore Police Department corruption, and there was no way they could run two. At this point I was already 2,000 words in, which isn’t really a big deal, so I scrapped the piece and continued to write about the things I cared about like direct service, community engagement, and how we can empower young people through literature.

“You should write something for Highline,” my friend Wil said to me at a bar one night. “I know an editor at Highline who would love to get his hands on some of your work, can I connect you guys?”

I didn’t really have a big collection of ideas to explore at the time, so I went right back to pitching that Hersl piece.

“Hey, D, I love your idea,” the editor said, “but I’m not really interested in the essay where you just say a bunch of bad things about this cop. I mean you know and I know he’s an asshole, but why is he an asshole? If we can get to the bottom of why he acts the way he does, then I think it would make for a much better piece—honesty, transparency, and real reporting, like digging up old classmates, family members, teachers if they’re still around, and whatever it takes to get a whole story.”

“I could try that,” I thought, realizing that the 2,000 words I already had were headed straight to the trash.

“Everyone is quick to write pieces that trash cops,” the editor continued. “But we will never truly solve the problem until we get to the root of who these people are and who are the people who allow them to function.”

I took that energy into my assignment. After all, I have committed all kinds of crimes, changed my ways, and enjoy when people understand not just where I came from, but why I did what I did, and what it took for me to change. Hersl has a past as well, and we needed to know how he got started. Who were the people who overlooked his obvious crimes, and does that culture of policing allow such things to exist?

I answered all the questions above by doing a deep dive into his history, talking to his family, friends, and anyone close to the situation who wanted to provide insight. I should probably say it wasn’t easy because I spent so much time in neighborhoods and in and around bars and lounges that didn’t care for Black people, or didn’t care for strangers, or both. Luckily, I didn’t get into any fights or bad altercations after the dozens of arguments created from asking questions about the disgraced cop.

I really knew I did my job when I got an email from one of Hersl’s friends who was aware of my snooping around and then read the piece. He wrote: “I don’t think it’s his fault, he should not be in prison because he only followed what his superiors did, but I just wanted to write you and let you know that you got it. This is the truest piece of work on this matter I ever saw. You got it.”

I told the truth and that is what we should all be aiming to do. Beyond Twitter rants from pseudo researchers and digital geniuses, are connections, relationships, and conversations with real people. These conversations aren’t easy to have, and they make us upset. But they show how our disagreements aren’t simply black and white; they are nuanced and complicated and deserve time, attention, and care. People who read this essay will have a better understanding of how the system rewards cops for being bad at their jobs, and I believe that understanding that dynamic alone will lead to substantial change.

“Only a Mile and a Big World Separated Us” tells the story of two kids from the east side of Baltimore. The first is me, a Black guy who grew up in a drug family in a rough neighborhood and ended up selling drugs. The other is Daniel Hersl, a white guy, who grew up…
We use cookies on our website to give you the most relevant experience by remembering your preferences and repeat visits. By clicking “Accept”, you consent to the use of ALL the cookies. However you may visit Cookie Settings to provide a controlled consent.
Cookie settingsACCEPT
Manage consent