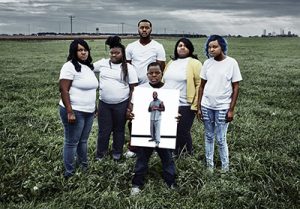 The United States imprisons its people at an unprecedented rate never seen in human history. It leads the world in the highest rates of incarceration, imprisoning a staggering 25% of the world’s prison population and creating what is currently known as mass incarceration.

The battle cry has been summoned demanding justice and calling for prison reform. While the masses in America are waking up to this moral and political crisis, families and impoverished communities that are disproportionately black and brown continue to suffer under the atrocities of a broken criminal justice system. Here in America, incarceration is big business and one community in the heartland has taken the greatest toll.

The ZIP code 53206 sits on the north side of Milwaukee and is the most incarcerated ZIP code for black men in the nation. Nearly two thirds (62%) of its adult men have spent time in jail or prison before their 34th birthday. To understand the reality of these statistics, I followed the community for over a year. Despite the strength and formidable spirit of the people, over-sentencing and policies like truth-in-sentencing have ravaged the residents of 53206, leaving them devastated and struggling.

MILWAUKEE 53206 is an intimate story that sheds light on the effects incarceration has on families and a community where so many of its men are imprisoned. The film asks audiences to look past the white paper statistics, charts, and graphs and into the lives of families who are living daily with incarceration. What happens when we take a closer look? What insights are there to learn when we are in the living rooms of ordinary people with extraordinary burdens in the criminal justice system? What is the emotional, financial, and long-term impact? These are the questions MILWAUKEE 53206 seeks to address.

Through the personal stories of Beverly Walker, Chad Wilson, and Dennis Walton, MILWAUKEE 53206 reframes the way we think and feel about incarceration. With The New York Times reporting that 1.5 million black men are missing from American society due to early death and incarceration, MILWAUKEE 53206 brings to life this story that echoes in communities from coast to coast.

Accompanying the documentary is a social impact campaign that uses the stories in the film as springboards to larger discussions about mass incarceration, race, and inequality. As part of the campaign, MILWAUKEE 53206 and its discussion guide have been used as tools for training, lobbying, and teaching. The goals of the social impact campaign are to:

The social impact campaign has built and engaged coalition partners in 10 key cities across the nation, with Milwaukee and Atlanta leading the way. They engaged a diversity of industrial sectors and service agencies to host events featuring the documentary followed by in-depth discussions with viewers about the themes of the film. Coalition partner events include faith leaders and their congregations, advocacy groups, government agencies, law enforcement, departments of corrections, technology companies, policy makers, US Congress, public defender groups, influencers and artists, community groups serving families and returning citizens, universities, and prison groups.

By humanizing the narrative of mass incarceration, MILWAUKEE 53206 and its social impact campaign are actively opening dialogue and asking the questions about how we can create an attitudinal shift in the national conversation about the atrocities in the criminal justice system. By reframing the crisis as a moral problem, the documentary and the campaign seek to strengthen advocacy for prison reform in public and coalition groups, empower service programs to better support prisoners and their families, and give voice to the millions of American families and communities who live day to day with the traumatic effects of incarceration.

Keith McQuirter directed MILWAUKEE 53206, which tied with 13th to win the film category in the 2017 Media for a Just Society Awards. McQuirter’s production company, Decoder Media, is based in New York City.

The United States imprisons its people at an unprecedented rate never seen in human history. It leads the world in the highest rates of incarceration, imprisoning a staggering 25% of the world’s prison population and creating what is currently known as mass incarceration. The battle cry has been summoned demanding justice and calling for prison…
We use cookies on our website to give you the most relevant experience by remembering your preferences and repeat visits. By clicking “Accept”, you consent to the use of ALL the cookies. However you may visit Cookie Settings to provide a controlled consent.
Cookie settingsACCEPT
Manage consent