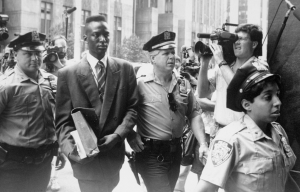 Good stories put us in someone else’s shoes. Great stories put a mirror in front of our faces and leave us asking our reflection, What are you going to do about this?

Good stories put us in someone else’s shoes. Great stories put a mirror in front of our faces and leave us asking our reflection, What are you going to do about this?

Each year, through our Media for a Just Society Awards, NCCD recognizes those individuals in the media whose work furthers public understanding of criminal justice, juvenile justice, child welfare, and adult protection issues. These journalists, artists, and creators bear enormous power. Though they often work against great odds, they find the stories we need to hear—those that make us realize our common humanity and our universal connections. When they succeed, as the winners of this year’s MJS Awards have, they give voice to those who have been silenced and ignite in all of us the need to act.

The winners of the 2013 MJS Awards competed against over 100 other nominees in the categories of film, book, magazine, newspaper, radio, TV/video, and web. This year’s winners include author Andrew Solomon, who will receive the first Distinguished Achievement Award in Nonfiction for his landmark book Far From the Tree; and filmmakers Ken Burns, Sarah Burns, and David McMahon for The Central Park Five, their documentary on the miscarriage of justice in the “Central Park jogger” case.

This month we have the pleasure of going backstage via blog post with many of our winners. We’ll learn about the impetus for their work, the challenges of its creation, and what these issues mean to them. Among others, we’ll hear from writer James Ridgeway, who won an MJS Award for his poignant and thought-provoking representation of elderly lifers in US prisons in Mother Jones; and Amanda Aronczyk, whose BBC radio broadcast uncovered how 1 in 5 people in Philadelphia have debt from being involved in the criminal justice system. We also have the privilege of an original blog post from Korey King Wise, who as a teenager was unjustly convicted and imprisoned in the “Central Park jogger” case, as shown in the winning film The Central Park Five. Come back often during August and September—these posts are not to be missed.

NCCD will honor this year’s winners at the MJS Awards ceremony and reception on Wednesday, October 2, 2013, from 6 to 9 p.m. at the W Hotel in San Francisco. We warmly invite you to join us in recognizing these individuals by purchasing tickets or becoming a sponsor of the MJS Awards.

Nobel Laureate Czeslaw Milosz said, “In a room where people unanimously maintain a conspiracy of silence, one word of truth sounds like a pistol shot.” NCCD thanks this year’s winners for bringing us the truth and inspiring us to act. We look forward, along with our judges, to honoring them at this year’s ceremony. We hope to see you there.

Amanda Aronczyk, What Happens to a Person’s Money After They Leave Prison?

Sarah Burns, My History With the Central Park Five

Korey King Wise and Deborah D. Grison, PhD, A Matter of Life and Destiny: How a Paper Turned Into a Purpose

*Pictured: Yusef Salaam, then 15, enters the Manhattan Supreme Court for deliberations in the case of the “Central Park jogger.” The story of Salaam and four other teenagers unjustly accused and convicted is told in the Media for a Just Society Award-winning film The Central Park Five. Photo credit: Getty Images

Erin Hanusa is the Senior Communications Manager at NCCD.