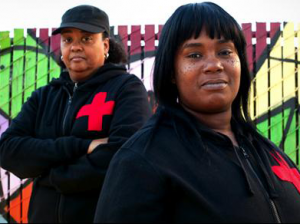 Ali Budner and Martina Castro’s radio piece, “The Race to an Emergency,” which originally aired on KALW Radio, is a 2014 Media for a Just Society Awards finalist. Discover the other finalists here.

Ali Budner and Martina Castro’s radio piece, “The Race to an Emergency,” which originally aired on KALW Radio, is a 2014 Media for a Just Society Awards finalist. Discover the other finalists here.

This story started small—with just two women. On a rainy weekend in the spring of 2012, I attended a Red Cross first aid training, where I first met Lesley Philips and Sharena Thomas [pictured]. Amid a room full of mostly young white Occupy Oakland activists, Lesley and Sharena, two African American mothers from East Oakland, stood up and explained they were tired of the street violence in their neighborhoods. They said 911 was neglecting them, so they had decided to do something about it.

They had recently formed a group called The People’s Community Medics, whose mission was to learn and then teach basic first aid skills to people in underserved communities of color. These are parts of Oakland where violent crime is concentrated and where, they claim, emergency responders take too long to show up. Yes, they were concerned about the police brutality at Occupy protests. But for them, violence was a daily problem they desperately needed to address.

These women impressed me, both with their resolve and the urgency of their mission. Lesley and Sharena knew first-hand the violence they were talking about. They had lost family members and neighbors on the street.

I wanted to know more about why they did not trust 911. So I approached them during a break in the training, and they agreed to an interview at their next community training. My plan was to do a simple profile piece for KALW about The People’s Community Medics.

But this profile quickly grew. My editor, Martina Castro, asked: Can we find out if 911 actually responds slower in the areas Lesley and Sharena are talking about? And what do emergency responders say about this claim? And do most people even know how a 911 call is processed in the first place? Those essential questions led us on a reporting journey that lasted nearly a year and a half.

I went to three different 911 call dispatch centers and rode along with emergency responders from the Oakland fire department, ambulance service, and police, all to see the 911 response through their eyes. I interviewed emergency medical service administrators, and our production team gathered interviews with people in different Oakland neighborhoods to sample public perceptions of 911. We even brought in a sociologist to provide historical context for the racial elements of Lesley and Sharena’s complaints.

While all of the emergency responders I interviewed said they do not profile based on race, they did acknowledge real challenges in their work that could lead to delayed responses in some areas of the city. Here are some of the challenges we identified in Oakland’s 911 system.

1. A complex web of call dispatch centers where delays can occur.

2. Higher call volumes in low-income neighborhoods, which strains resources in those areas.

3. A policy called “staging,” designed to protect medical responders but which can lead to mistrust and delays in care.

4. A history of racism and police brutality in Oakland, which has created a culture of mistrust between law enforcement and the African American community.

As we tried to answer our original question—whether 911 response time truly depends on where you live—we worked with the Alameda County Public Health Department to analyze data from the paramedics and fire department and found that their response times are longer for the neighborhoods in question, but by a very thin margin.

Data from the Oakland Police Department (OPD) was the missing link in our calculations. After a lot of back and forth, we learned that the OPD does not consistently track officer response times. But in response to our persistent questioning, they promised to improve their recording methods and provide better data to the public.

Lesley and Sharena are continuing their work with The People’s Community Medics, training ordinary people to respond to gunshot wounds and stabbings. And we are still in communication with the OPD about improving their system for recording and analyzing 911 response times.

In the end, it seemed to us that a widespread lack of trust in 911 was as troubling as any real faults in the system. The question of what needs to be done to rebuild that trust and to ensure equal service remains mostly unanswered.

This documentary deals specifically with Oakland, but its themes resonate more widely. Racism, the complex relationship between cops and civilians, the stress that makes 911 emergencies so volatile, and the desire of ordinary people to act in the face of perceived injustice are universal realities.

A year of investigation gave us access to a deeper understanding of the competing perspectives on this complex problem.

Ali Budner is a radio producer based in Oakland, California. From 2010 to 2014, she produced Your Call, a daily live public affairs call-in show on KALW 91.7FM in San Francisco. She is moving on to pursue feature and documentary work. Ali discovered her love of radio in college while producing for the program Inside Out on Brown Student Radio. Since then, she has worked on features with The Kitchen Sisters, KPFA’s Full Circle, KALW’s Crosscurrents, and The National Radio Project’s Making Contact. Ali’s next step will be traveling to Fukushima, Japan with a group of journalists from San Francisco State University to work on a “restorative narratives” project. She’ll be hearing the stories of residents still coping with the long term aftermath of the tsunami and radiation disaster of 2011.

Martina Castro is a radio producer and editor based in San Francisco, CA. She’s co-founder and Senior Producer of the Spanish-language podcast Radio Ambulante, and just left her job as Managing Editor of KALW 91.7FM for a journalism Fulbright grant in Montevideo, Uruguay. Martina’s independent work has aired nationally on NPR’s All Things Considered and Morning Edition, performed for Pop Up Magazine, and has been recognized with awards from the Society of Professional Journalists and the Public Radio Program Directors Association. She has produced a dozen live radio performances and has given numerous workshops/talks on the art of narrative radio storytelling across the US and in Latin America.