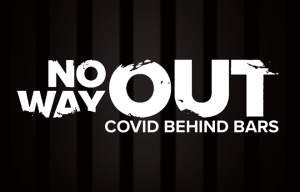 The genesis of No Way Out: COVID-19 Behind Bars was an angry call from a screaming spokesperson—and WFAA-TV reporter Tanya Eiserer was the unlucky recipient. Because it was a spokesperson I’d been dealing with for several years, Tanya called me for advice. Afterward we started chatting and realized we both had a lot of reporting on the worsening conditions in the Texas Department of Criminal Justice (TDCJ), which was—at that point—rapidly approaching the highest pandemic death toll of any prison system in the country. So, we pitched a collaboration that would be the first ever between our two newsrooms, and spent the next several months digging in.

Tanya tracked down staff willing to share their stories despite working for an agency that has seeded fear of retaliation among its workforce. Meanwhile, I obtained leaked emails; confidential lists of COVID-positive prisoners who’d been transferred while sick; and photos and videos secretly taken inside units to document fights, paltry meals, and a growing number of fires set inside cellblocks and locked-down pods as inmates struggled to get attention from guards stretched too thin to respond.

We pulled together a half-hour video documentary, with shorter web-only videos. We got raw, emotional letters from prisoners who overcame COVID and found people who were formerly incarcerated to read excerpts of them for an online audio feature. We broke news with multiple previously unpublished internal emails detailed in a long-form story for the website and again with a shorter investigative sidebar revealing how the growing prevalence of fires set by desperate prisoners was only possible because of the widespread lack of functioning fire alarms. As it turned out, previously unreported state audits showed that the agency lacked working alarm and fire suppression systems in dozens of prisons for much of the past decade and had not acted to fix the problem.

Much of our reporting was built on our years of sourcing inside TDCJ and behind prison walls. And, like most other reporters in 2020, we did most of our work remotely—except for a few physically distant interviews. Unlike most other reporters, though, the nature of our beats had already prepared us for pandemic journalism; since we covered prisons spread out across the state, we were used to communicating through letters and calls instead of in-person interviews. Fortunately, our sources were used to this too, and many took professional and personal risks to help us expose the deteriorating conditions and spotty medical care behind bars.

No Way Out: COVID-19 Behind Bars is a finalist in the video category for the 2021 Media for a Just Society Awards. The video was a collaboration between Keri Blakinger of The Marshall Project and Tanya Eiserer of WFAA-TV in Dallas. Watch the shorter videos—mentioned in this blog post—here.

The genesis of No Way Out: COVID-19 Behind Bars was an angry call from a screaming spokesperson—and WFAA-TV reporter Tanya Eiserer was the unlucky recipient. Because it was a spokesperson I’d been dealing with for several years, Tanya called me for advice. Afterward we started chatting and realized we both had a lot of reporting…
We use cookies on our website to give you the most relevant experience by remembering your preferences and repeat visits. By clicking “Accept”, you consent to the use of ALL the cookies. However you may visit Cookie Settings to provide a controlled consent.
Cookie settingsACCEPT
Manage consent