A Look Inside The Prison Within

A Look Inside The Prison Within 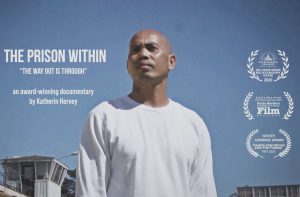 The Prison Within aims to shatter the perception of Us and Them as divided and defined by prison walls—walls designed not only to keep people in, but to keep society out. The physical separation from society does not originate from a place of public safety but from the belief that those imprisoned are fundamentally different from the rest of Us. This physical and social division allows the system to justifiably contain, warehouse, and ultimately discard Them under the false premise of public safety for Us.

In stark contrast to mainstream media representations of victims and those we label as criminals, responsible development of our film, The Prison Within, meant we would have to both capture the complexity of this subject and unwind that complexity in a way that the audience could comprehend. It was a lofty endeavor, but we were fortunate to have the guidance and support of Jaimee Karroll, who appears in the film.

Jaimee was abducted and repeatedly raped when she was 9 years old and was healing the wounds of her trauma in the most unexpected of places: San Quentin Prison. She was a survivor of violent crime, but she also felt a familiarity between her own pain and rage in the stories she heard from men incarcerated for violent crimes. Jaimee said, “I had always felt enraged by the way I was beaten and raped, but I had also always feared that I might be more like my perpetrators than I cared to discover.”

We began filming the program that changed Jaimee’s life—the Victim-Offender Education Group (VOEG)—inside San Quentin Prison, where Jaimee served as a facilitator until her death in 2013 at age 58. VOEG continues to take place each week, with a group of men gathered in a circle to identify patterns of destructive behavior that culminated in the ultimate act of violence: killing another human being. But the program is more than connecting the dots of the past. After unpacking the pain, shame, and rage related to unresolved trauma, they learn to replace the negative patterns with healthier patterns of thinking and behaving. Each circle is facilitated by a survivor of violent crime and is peer supported. It is an intimate, collaborative process for everyone in the circle, as they hold each other accountable to go deep within themselves. All voices are heard and supported.

As the men we filmed took responsibility for their actions, and they broke down and processed lifetimes of trauma, we watched the distinction between Us and Them dissolve. In its place, the complex role that sociopolitical factors play in our own life experiences became undeniable. The legacy of systemic oppression and marginalization of certain groups has paved the way for a trauma-to-prison pipeline that cannot be ignored. Incarcerated individuals are most often survivors first. Hurt People Hurt People.

The prison system is representative of the darkest parts of ourselves, where we lock away that which is most difficult to confront—the poor, the other, anybody or anything that slightly threatens our sense of the collective—Us. After all, it’s much easier to point the finger and judge the “other” than to point at ourselves.

In the wise words of Jaimee Karroll, “the way out is through.” In order to unpack and process the darkest moments in each of our own lives, we must first walk into the dark and ugly parts we have locked away. The men and women in the film—both those who committed harm and those who experienced harm—are doing this restorative work, revealing how each one of us holds the power to break free from our own personal prisons.

As the viewer watches the men and women heal, we hope the audience looks within themselves to ask: Do I as an individual recognize my own pain as well as the pain that I may have caused others? Can I forgive myself and forgive those who have harmed me? If not, what is needed to heal the harm? Ultimately, we must realize we are all greater than our worst act or the worst thing that has been done to us. We are not the sum of a single act and should not be defined or labeled as such.

So, what then is our definition of “justice”? The current American penal system is anchored in retribution. In this punitive system, achieving “justice” necessarily requires exacting a measure of vengeance against the “offender.”

The United States has the highest incarceration rate in the world. Scholars regularly declare that the US model of incarceration dehumanizes poor people and people of color, damages already marginalized communities, perpetuates cycles of trauma, fails to advance public safety, and drains public resources. Who are we providing justice for? A penal system does not need to be violent to be effective, as many other nations—and this film—have proven.

More than 2.3 million people are currently incarcerated in the United States; more than 95% will be released and return to their communities without ever addressing the root cause of their violence. To truly achieve “justice” and the promise of public safety, we must address the root cause of violent crime and stop the cycle by healing individual and societal harms, not just lock Them away.

We hope The Prison Within continues to inspire a dialogue about trauma’s debilitating impact on individuals and communities, expose our shared responsibility to collectively heal our mass incarceration crisis, and motivate definitive community justice reform.

Katherin Hervey is the director/producer and Erin Kenway is the producer/executive producer of The Prison Within, a finalist in the film category for the 2021 Media for a Just Society Awards. Watch this space for additional blog posts written by other creators of media chosen as finalists.

The Prison Within aims to shatter the perception of Us and Them as divided and defined by prison walls—walls designed not only to keep people in, but to keep society out. The physical separation from society does not originate from a place of public safety but from the belief that those imprisoned are fundamentally different…
We use cookies on our website to give you the most relevant experience by remembering your preferences and repeat visits. By clicking “Accept”, you consent to the use of ALL the cookies. However you may visit Cookie Settings to provide a controlled consent.
Cookie settingsACCEPT
Manage consent