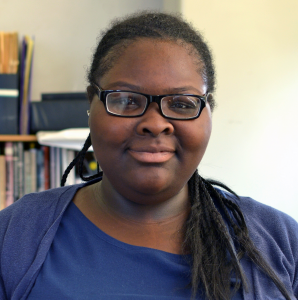 Raelene Holmes-Andrews is a Media for a Just Society Award winner in the category of youth media. Her winning documentary, Life Under Suspicion, can be found here.

Raelene Holmes-Andrews is a Media for a Just Society Award winner in the category of youth media. Her winning documentary, Life Under Suspicion, can be found here.

At the age of 17, I was introduced to the youth media organization Educational Video Center (EVC) through my advisor, Noah Golden. At EVC, we were approached by Manhattan Deputy Borough President Rosemonde Pierre-Louis to document, from a youth perspective, how the New York Police Department’s controversial stop-and-frisk policy affects New Yorkers and their families. For me, I hadn’t known anything about filmmaking, let alone anything about the topic. So joining EVC’s documentary workshop was an eye opener for me.

There were 12 of us all together—students from high schools around the city earning academic credit while learning to make documentary films. We worked under our instructor, Christina Biddle, spending 12 hours a week after school, for 15 weeks, researching, interviewing, creating music, editing, and socializing with each other all to produce our documentary, Life Under Suspicion.

I was the only student working towards a GED who wasn’t earning credit, but that didn’t stop me. I was able to learn about my own community in Harlem through a different point of view—a higher point, seeing as we met many New York City Council members and politicians throughout the process, including Council Speaker Melissa Mark-Viverito; Glenn E. Martin, former vice president of the Fortune Society; and Public Advocate Letitia James, to name a few. I had never been interested in politics or using my voice to commit social change prior to joining EVC. But then I started to notice the issue being discussed on the news a lot more. So, I got a lot more interested.

What I remember most about the program was the postproduction editing process. Along with a few of my peers, I was assigned to edit the middle of the video, which contained many of the personal stories that we had captured. One young man told us that following his arrest, blood was still dripping from gauze on his forehead as he stood before the judge. He had been beaten badly by police in the hallway in front of his grandmother’s apartment. When asked about this, his grandmother told us in Spanish that she wished they had beat on her instead of her grandson. It was memorable to me because he had children, his grandma was really old and sick, and he and I were about the same age.

Reviewing that footage was very touching. Not many people had positive experiences to share with us. Sadly, this problem of police brutality is getting worse with the recent deaths of Eric Garner and Michael Brown. I hope our film can open people’s eyes to this problem, help us make a difference, and stop the violence.

Growing up in Harlem, Raelene Holmes-Andrews dreamed of being in the film industry. At the EVC, she honed her skills, collaboratively producing three youth documentaries on the stop-and-frisk policy, environmental justice, and bullying. An emerging filmmaker and activist, Ms. Holmes-Andrews also interned as an assistant instructor at EVC, Deep Dish TV: Waves of Change, and MIST Harlem. She is now a freshman majoring in new media technology at LaGuardia Community College in New York City.