Judicial Leadership in the Juvenile Court

Judicial Leadership in the Juvenile Court 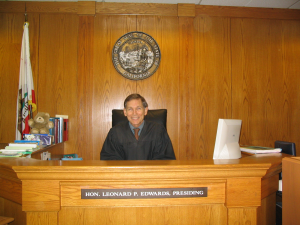 Have you ever wondered why some courts work so well and others do not? Or why some communities seem to respond to delinquent youth more effectively than others? Chances are that the individual juvenile court judge or judges are responsible for the successes. Judicial leadership in the juvenile court can produce remarkably positive results both in and out of the courtroom.

Have you ever wondered why some courts work so well and others do not? Or why some communities seem to respond to delinquent youth more effectively than others? Chances are that the individual juvenile court judge or judges are responsible for the successes. Judicial leadership in the juvenile court can produce remarkably positive results both in and out of the courtroom.

Juvenile court judges have a unique and extraordinary role in our justice system—much different than that of the traditional judge whose primary function is to preside over courtroom matters. In addition to courtroom responsibilities, the juvenile judge’s role includes leadership, administrative, collaborative, advocacy, and engagement activities. Each state legislature has created a juvenile court, a separate part of the court system dedicated to addressing the special needs of at-risk children and their families. In order to fulfill juvenile court goals, the juvenile court judge must ensure that the court runs well; that innovations are tested and implemented; and that someone from the court, preferably the judge, informs the community regarding these children’s needs and takes steps to inspire the community to meet those needs. The notion that the court has been running well for years and that no changes are needed ignores the effective interventions that have been developed over the past 10 to 15 years—changes that have substantially improved outcomes for children and families appearing in the juvenile court.

National policy makers recommend that juvenile court judges assume many leadership roles. These include urging juvenile court judges to “take on a new role,”[1] develop “a new way to do business,”[2] divert “families from traditional child protection services into community-based programs,”[3] and serve as “a case manager, convener, change agent, and system advocate.”[4] As Professor Moore writes, “[t]he only institution that can reasonably exercise leadership on behalf of the society and children is the juvenile court.”[5] The National Council of Juvenile and Family Court Judges (NCJFCJ) adds: “The success of our nation’s juvenile and family courts is directly related to the leadership provided by the juvenile and family court judges serving in them.”[6]

Two distinctive types of judicial leadership exist: in court and out of court. In court, the juvenile court judge leads by setting standards for the timely disposition of cases, monitoring the progress of cases through the court system, scheduling credible court dates, and controlling the granting of continuances. Timeliness is particularly important in children’s cases, and the judge sets the pace of litigation in the courtroom. The judge leads outside of the courtroom by convening professionals and members of the community to inform him or her of the needs of children appearing in juvenile court and in proposing projects and initiatives that will address those needs.

Judicial leadership starts with the judge’s ability to convene. If a judge calls a meeting, people will come. The judge, however, should not call a meeting unless he or she has an agenda for positive change. Whether developing a new program, informing the community about the needs of the children coming before the court, or addressing a problem, the meeting has the potential of improving court operations. I recall convening a meeting to discuss the use of court-based mediation in child protection cases. I had just been reassigned from domestic relations to juvenile court and believed that mediation, which was required in child custody cases, might be useful in juvenile court. Everyone at the table was skeptical or downright opposed to the idea. By sticking to my guns, I was able to persuade everyone to give mediation a try. The results have been rewarding such that now, more than 25 years later, mediation is an integral part of our juvenile dependency court process—one that is unanimously supported by professionals and clients.[7] It is also considered a best practice by many other courts around the country.

In another instance, I read about an innovation in Washoe County (Reno), Nevada, where Judge Charles McGee had started a dependency drug treatment court. After convening a planning meeting with some of the attorneys, child welfare leaders, and other professionals, we agreed to visit Reno to find out more about this new court. Twelve of us traveled to Reno, where we spent a day in court and visited service providers in the community. We concluded that this was a model we wanted to implement. Thereafter, we met regularly, developed protocols, built new working relationships, and finally opened our dependency drug treatment court—the first in California. Twenty years later, what we now call our family wellness court has proven to be more successful than we ever imagined, with historically high family reunification rates.[8]

Where does a judge get best practice ideas? Usually from colleagues in different jurisdictions. In my experience, NCJFCJ offers a judge the best opportunities for meeting judicial colleagues, for being exposed to innovative ideas, and for obtaining technical assistance in order to implement those ideas in the home jurisdiction.[9] NCJFCJ authored Resource Guidelines: Improving Court Practice in Child Abuse and Neglect Cases and Juvenile Delinquency Guidelines: Improving Court Practice in Juvenile Delinquency Cases—each providing guidance for improving court practice. Thereafter, NCJFCJ created model courts across the country, dedicated to implementing best practices in juvenile court by reference to these guidelines. Judicial leadership has been the starting point for each of these court improvement documents. NCJFCJ membership brings great benefits to judges; to attend an NCJFCJ conference is to be exposed to the best and the brightest juvenile court judges in the country and to learn how they are making changes in their courts.

Learning about best practices is the first step; making changes in your jurisdiction comes next. Convene the necessary persons in your community and inform them about what is taking place in other jurisdictions. Expose them to possible changes that will improve outcomes for children and families. Consider making a visit to a court where the best practice has been implemented. Make certain that team members have an opportunity to meet their counterparts during the visit. The visit will help create a team atmosphere and identify common goals that everyone will be interested in reaching.

Leadership is about transforming good ideas into practice. Many judges have provided leadership in their courts by following these steps. The beneficiaries have been the children and families appearing in the juvenile court.

Judge Leonard Edwards is a retired judge now working as a consultant, educator, and trainer. He served as a Superior Court Judge in Santa Clara County for 26 years and then for six years as Judge-in-Residence at the Center for Families, Children & the Courts, a division of the California Administrative Office of the Courts. As a judge he worked in the juvenile court for more than 20 years. As Judge-in-Residence he served California’s courts as a consultant specializing in juvenile and family law, domestic violence, drug courts, mediation, judicial ethics, and other issues relating to children and families within the court system.

For further reading on this and related topics, please visit Judge Edwards’ website.

[6] Resolution #6, adopted July 19, 2006, by the membership of the NCJFCJ annual conference in Milwaukee, Wisconsin.

Have you ever wondered why some courts work so well and others do not? Or why some communities seem to respond to delinquent youth more effectively than others? Chances are that the individual juvenile court judge or judges are responsible for the successes. Judicial leadership in the juvenile court can produce remarkably positive results both…
We use cookies on our website to give you the most relevant experience by remembering your preferences and repeat visits. By clicking “Accept”, you consent to the use of ALL the cookies. However you may visit Cookie Settings to provide a controlled consent.
Cookie settingsACCEPT
Manage consent