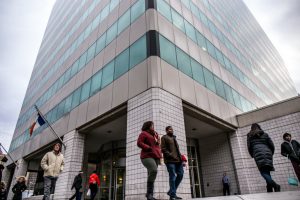 Three years ago, City Limits started an internship program for high school and college students (or young people of college age) from the Bronx. The program, launched with the help of the Simon Bolivar Foundation and supported now by the Pinkerton Foundation, had three goals: provide paid work experience in the borough with the highest unemployment in New York City, introduce participants to the basics of investigative journalism, and produce stories that highlight underreported problems in the Bronx.

Since then, guided by experienced journalist-instructors, our interns have produced reports on fast food, disparities in access to fitness, problems with daycare regulations, litter hotspots, unreliable bus schedules, barriers to reporting crime, and the lack of attention to gun dealers in busts of local gun-smuggling rings. In each of the six rounds of the internship so far, an early session has focused on the importance of documents to investigative reporters—as a way to report a story, and even as a way to learn that a story is there to report in the first place. Our story from early 2016, “Inmates Want Files to Prove Innocence. DA Can’t Find Them,” reported by the fall of 2015 intern class, was a perfect example of the truth of that lesson.

The story tells about prisoners in state facilities who filed Freedom of Information Law (FOIL) requests with the Bronx district attorney (DA) seeking files from their cases, with the goal of doing research toward overturning their convictions. In case after case, we learned, those requests were ignored, denied, or approved but never fulfilled. Sometimes the denial was justified by the DA on the grounds that the files simply could not be found.

We happened upon the story after completing an exercise: Interns were told about the importance of legal paperwork as a source for story ideas and reporting documents and were encouraged to check a county database for suits against public officials. Several interns came back with similar suits against then-Bronx DA Robert Johnson. We detected a pattern and decided to look a little further. We found more.

The students set out to write to the requesters in prison to find out more about their cases. A few wrote back. We also worked together trying to track down people who had been paroled since their FOIL request; we had little luck initially, but the interns had learned a few tricks of the trade when it comes to finding people. Where possible, students found news clippings about the alleged crimes and tried to track down witnesses and lawyers. Once reporting was in hand, the instructor went to the Bronx DA to ask some questions and learned about deep problems with the office’s record-keeping systems.

What was great about the story was that its moral was both simple and nuanced. It wasn’t that each, or even any, of the requesters seemed to have a strong case to overturn their case. This wasn’t about good guys and bad guys. It was about principles of fairness and transparency. This resonated with the students.

It is often hard to trace a clear line from an article to the action that takes place as its result. But at a budget hearing later in 2016, your correspondent—the instructor on the FOIL story—was heartened to hear the Bronx DA ask for funding to improve the office’s record keeping. We believe our story added to whatever existing momentum there was within the DA’s office to take that step.

Jarrett Murphy is the executive editor and publisher of City Limits, a nonprofit investigative journalism entity based in New York City. He worked with the students named above, who are finalists in the youth category of the Media for a Just Society Awards.

Three years ago, City Limits started an internship program for high school and college students (or young people of college age) from the Bronx. The program, launched with the help of the Simon Bolivar Foundation and supported now by the Pinkerton Foundation, had three goals: provide paid work experience in the borough with the highest…
We use cookies on our website to give you the most relevant experience by remembering your preferences and repeat visits. By clicking “Accept”, you consent to the use of ALL the cookies. However you may visit Cookie Settings to provide a controlled consent.
Cookie settingsACCEPT
Manage consent