The Impact of White Silence

The Impact of White Silence 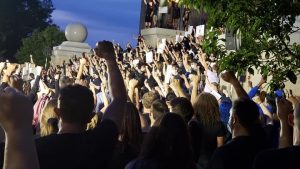 This blog was inspired by events that took place at a restaurant in the Hyde Park area of Boise, Idaho, on June 8, 2020.

Today was not the first time I’ve been called a “nigger.” But it felt the same. Today, like that day, I was on a sidewalk, minding my own business, surrounded by white people, as a racist sped down the street in his car and hurled that word at me like a rock. And though it wasn’t actually a rock, it felt like one.

The first time it happened I was 8 years old. And today, like that first time, I was there alone and no one said a word. Not one word to him. Not one word to me. And I felt as alone and vulnerable as I did as a little girl. This time, I just sat on that patio and sipped my wine, shockingly UNshocked by what had just happened. But as I have processed it, now I am angry. Angry that we live in a place and time where this is so accepted, so typical, that no one was even moved to respond. Angry at the fact that, after 45 years, I’ve just come to accept it. And mostly angry at the silence. The deafening white silence. 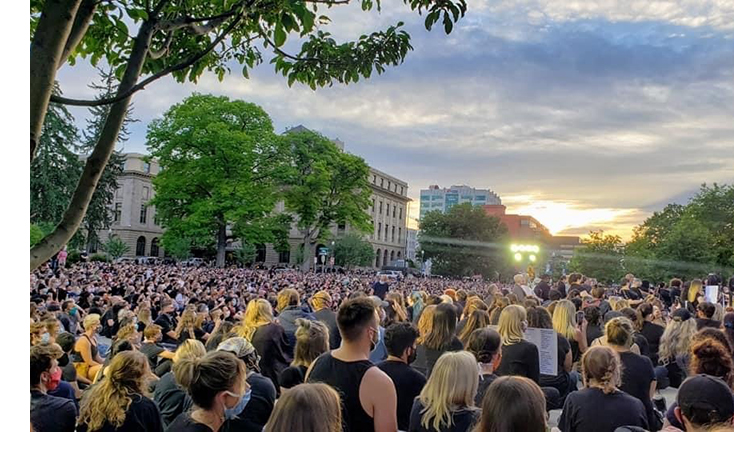 We are in a moment of unprecedented civil unrest in response to racism in the United States. In every state and several countries around the world, racially and ethnically diverse crowds have gathered to march, chant, hold signs, and protest the killings of unarmed Black men by police officers as well as the larger systemic racism that permeates the fabric of America. When comparing the videos of the protests and marches of the Civil Rights Movement and the protests that are still raging on today, it appears that the fight against racism has finally become less a Black issue and more a human issue. In record numbers, white people are standing up to identify themselves as anti-racist and as allies to the Black community. Even in my town of Boise, Idaho, a city with a Black population of about 2%, one of the state’s largest gatherings ever at the state Capitol Building was a candlelight vigil honoring the lives of George Floyd and the other Black people killed by police officers. Over 6,000 people attended. For a city the size of Boise, that is HUGE.

Against this backdrop, for the first time in my life, I started to think that we were at a turning point in the fight against racism. And as I sat at the sidewalk cafe, experiencing a moment of blatant racism, I expected to see outrage, support, solidarity. Instead I saw what I have always seen … white silence.

In the wake of these protests, many of my white friends have reached out to ask me what they can do. My stock answer has been to speak up. Talk to your kids; teach them about racism and how it plays out in this country. Have the uncomfortable conversations with your white friends about racism and white privilege and what it means to be an ally. Speak up. But I am realizing that maybe my advice wasn’t specific enough. Don’t just speak up when it’s easy. Speak up when it matters.

Now is the time for allies to stand up and make Black people feel like part of the community that is the United States. In this moment, white silence makes us feel as alone as we have ever been in this fight against racism. This is in stark contrast to the diversity I have seen at the recent protests. In the big moments, when there are crowds of people and cameras are catching every step marched and every word chanted, it’s easier to stand up. To say something. To blend in with the crowd on the side of right. But when it’s just you, white friend, what do you say? Do you let the Black person feel like she has allies in that moment who will stand with and beside her? Do you make her feel like she belongs to a community that might not look like her but will embrace and protect her? Do you act to create a world that condemns racism all the time and not just when it’s easy, convenient, or public? What do you do?

My whole life—from growing up in Alaska, to attending college in Eastern Washington, to attending graduate school for my PhD—has existed in majority white spaces. Throughout that journey, I have gained a small army of white friends, family, and “framily” who I know have my back. The anger and disbelief that erupted from them when I shared this story was genuine and palpable. And I love them for that. But I challenge them, all white allies, to put that anger to work. Not just in a big protest, but in the small moments in which you see racism every day. You won’t have to look very hard. It may not be someone yelling racial slurs out a car window. It may be the white clerk being unnecessarily rude to the Black customer. It may be a racist comment your white friend or family member says when no Black people are around. When it happens, I am asking you to stand up and speak up.

Don’t just stand up for me or the other Black person (or people) you know. I know I am loved by my white friends and family. I know they would stand up to racism if they were with me and it was directed at me. But this is not and should not be personal. As willing as you are to stand up for your Black friend, do it every time. EVERY. TIME. Because that person you don’t know, standing there feeling stripped bare and assaulted, is someone else’s Black friend or family member. And they deserve your allyship as much as I do. EVERY. TIME.

Dr. Taylor was interviewed by KTVB7, a Boise television news outlet, following the publication of her blog. Watch the interview here.

Charlene Taylor, PhD, is a senior researcher for NCCD.

This blog was inspired by events that took place at a restaurant in the Hyde Park area of Boise, Idaho, on June 8, 2020. Today was not the first time I’ve been called a “nigger.” But it felt the same. Today, like that day, I was on a sidewalk, minding my own business, surrounded by…
We use cookies on our website to give you the most relevant experience by remembering your preferences and repeat visits. By clicking “Accept”, you consent to the use of ALL the cookies. However you may visit Cookie Settings to provide a controlled consent.
Cookie settingsACCEPT
Manage consent