How Witnessing a Parent’s Arrest Affects a Child

How Witnessing a Parent’s Arrest Affects a Child 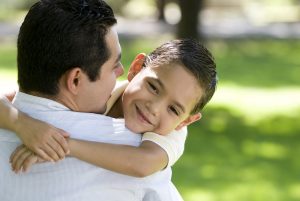 One day, while sitting in the home of a mother with a young boy, I asked if her son had witnessed his father’s arrest. She told me that her family was on a walk when several police cars drove up and surrounded them. Right in front of the family, police officers arrested her husband for violating parole, while her son kept asking where and why they were taking his dad. The experience instilled in her son a fear of law enforcement, she said, and he cried when he saw police cars or heard sirens. He became hypervigilant about his car seat being buckled, as someone had told him it was against the law for children to ride in cars unbuckled. The story was difficult for her to tell; it was clear the experience left her shaken and upset her son. She asked aloud: Why did they have to take him that way? Why involve my son like that?

I was in her home as part of a research project, seeking to understand more about children with a parent in jail. When talking about big concepts like criminal justice policy, the experiences of children of incarcerated parents are often left unvoiced. One area that few people consider is what happens when a child witnesses the arrest of his or her parent.

The story I heard from that mother was far from unique. I recently co-authored a chapter in the Oxford Handbook of Clinical Child and Adolescent Psychology, focusing on the five-plus million children in the United States who have or have had a parent in jail or prison. In the chapter, we discuss what is known about the traumatic effects of witnessing incarceration-related events, including arrests, on children. No systematic data is collected on how often children are present for a parent’s arrest; however, one study of families who have been investigated by child protective services found that nearly 40% of children in the study had witnessed the arrest of a household member (Phillips & Zhao, 2010). In our research project, led by Dr. Julie Poehlmann-Tynan at the University of Wisconsin–Madison, we asked caregivers whether their child had witnessed their father’s arrest, and if so, the level of distress experienced by the child. Nearly a quarter reported their child had witnessed the arrest, and most reported the experience as “extremely distressing.”

Multiple studies have documented the trauma and subsequent suffering and difficulties experienced by children who witness parental arrests. Yet, a 2014 report by the International Association of Chiefs of Police states that many law enforcement agencies do not have specific policies in place to protect children during arrests. They propose a model policy to be adopted by law enforcement agencies that includes interagency coordination with, for example, child welfare agencies; training for officers to understand developmentally and trauma-informed ways of interacting with children; pre-arrest planning to minimize exposure of parental arrest to children; and working with the parent whenever possible to identify caregiving options for their children.

I would add that, while efforts to minimize the traumatic effects of parental incarceration are needed, the most effective, broad-reaching, and humane approach to promoting the well-being of children of incarcerated parents is to seriously take on the scourge of mass incarceration and thereby drastically reduce the number of children exposed to parental incarceration. Avoidable threats to child development are best tackled from a prevention perspective, in which the risk itself is reduced or eliminated, rather than solely focusing on addressing the problems that arise from the threat. Mass incarceration is a public health crisis for children and families in the United States, disproportionately affecting children of color.

A father I spoke with in a state prison described the pains he took to ensure his 2-year-old daughter, for whom he was the primary caregiver, did not witness his arrest for failure to pay child support. He called his mother to watch his daughter, then called the police and waited outside for them to arrive to take him to jail. What would it take for us to put law enforcement policies in place that hold the experiences of children in mind like this father did for his daughter? Children witnessing these traumatic events do not just disappear when their parents are incarcerated. They carry their experiences with them to school, in communities, and as they grow into adulthood. I am grateful to the many caregivers who invited us into their homes and shared their stories. I heard from more than one that their reason for doing so was to shine a light on their experiences and the experiences of their children. When thinking about police practices, especially surrounding arrests, we must remember the children who are watching— and do better.

Cynthia Burnson, PhD, is a researcher with NCCD. This blog post stems from research Dr. Burnson conducted with colleagues at the University of Wisconsin–Madison. Based on this research, Dr. Burnson and her colleagues, Julie Poehlmann-Tynan, Hilary Runion, and Lindsay A. Weymouth, wrote a chapter for The Oxford Handbook of Clinical Child and Adolescent Psychology titled “Children With Incarcerated Parents.” The Oxford handbook was published this month.

One day, while sitting in the home of a mother with a young boy, I asked if her son had witnessed his father’s arrest. She told me that her family was on a walk when several police cars drove up and surrounded them. Right in front of the family, police officers arrested her husband for…
We use cookies on our website to give you the most relevant experience by remembering your preferences and repeat visits. By clicking “Accept”, you consent to the use of ALL the cookies. However you may visit Cookie Settings to provide a controlled consent.
Cookie settingsACCEPT
Manage consent