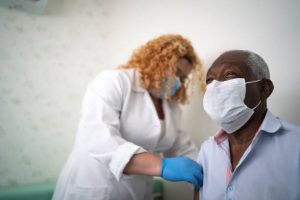 According to the Centers for Disease Control and Prevention (CDC), long-standing systemic health and social inequities have placed racial and ethnic minority groups at an increased risk of contracting COVID-19. Research has shown that many Black Americans do not trust health care providers to act in their best interest—a mistrust that could carry over to the current vaccination effort.

This mistrust is compounded by the remembrance of the Tuskegee Study of Untreated Syphilis in the Negro Male, also known as the Tuskegee Study, which was conducted by the US Public Health Department and the Tuskegee Institute. The study began in 1932 and was supposed to last only six months—but remained active until 1972.

During that 40-year period, hundreds of Black men were injected with a deadly viral disease without their knowledge in exchange for meals, physicals, and burial expenses. The study was finally shut down after whistleblowers came forward and the study became known to the public. While the outcry was immense, the damage was done. Many of those infected men would eventually die from the disease, but not before infecting their wives and children.

The Tuskegee Study will forever remain a stain on the US public health system, and much work needs to be done to right those dreadful wrongs. Despite President Bill Clinton’s public apology in 1997, many Black Americans still do not trust the public health system.

Awareness of the gross disparities in our country’s health care system has been increasing, but the COVID-19 pandemic has brought those inequities into sharp focus like few other events in US history. A Commonwealth Fund report showed that confirmed COVID-19 cases and deaths were disproportionately higher in communities with large Black, Brown, and Indigenous populations. Other factors such as poverty, unemployment, and underemployment contribute to the spread of the disease in communities of color, as many individuals must rely on public transportation; work in essential, low wage-paying jobs; and live in crowded households where social distancing is not an option. In May, Wisconsin’s COVID-19 death disparity was third worst in the country. Segregation plays a major role in these disparities, with the Milwaukee metro area ranking among the most segregated in the United States.

Now that health care workers and frontline workers are receiving the vaccine, debate is taking place about who should receive it next. Many believe that communities of color should be next in line because of the nation’s long-standing history of racial disparities and the fact that folks in these communities are the most adversely impacted by the virus.

Given the grievous historical treatment that people of color have experienced in the health care system, it is even more imperative at this moment in history to engage these communities and encourage them to trust the vaccine. A recent Pew Research study indicates that less than half (42%) of all Black American adults are willing to be vaccinated. While the skepticism is understandable, educating the general public—and specifically those in Black and Brown communities—is of the utmost importance. Their very lives depend on it.

According to the Centers for Disease Control and Prevention (CDC), long-standing systemic health and social inequities have placed racial and ethnic minority groups at an increased risk of contracting COVID-19. Research has shown that many Black Americans do not trust health care providers to act in their best interest—a mistrust that could carry over to…
We use cookies on our website to give you the most relevant experience by remembering your preferences and repeat visits. By clicking “Accept”, you consent to the use of ALL the cookies. However you may visit Cookie Settings to provide a controlled consent.
Cookie settingsACCEPT
Manage consent