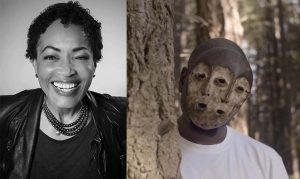 “The role of the artist is like a lover. If I love you, I have to make you conscious of things you don’t see.” ― James Baldwin

On my last days of filming a short documentary in a refugee camp in Ghana titled Women Together as One, one of the women leaders there, Helen, said, “You know, Sis Gilda, the same AK-47s that you saw in the hands of children in the Liberian Civil War are on your streets and in your children’s hands—you need to do something about that.” With this statement, Helen breathed life into Baldwin’s words. She made me conscious of conditions among our youth back home. Why were American youth in urban areas joining gangs as early as age 11?

In addition to being a filmmaker/storyteller, I teach sociology at The Evergreen State College in Tacoma, Washington. Evergreen is an urban liberal arts college situated in the heart of gang activity.

The Hilltop neighborhood was carved out through a historic system of redlining—a discriminatory real estate practice in which lenders refuse to provide loans or extend credit to minorities in certain parts of a town or city. As in many cities, downtown became a ghost town. Disinvestment in schools and a lack of employment opportunities hit Tacoma hard. This is the pattern leading to gentrification, where BIPOC and poor communities experience higher home and rental prices, forcing many Black families to relocate to surrounding suburbs. Those who remain often lack access to traditional financial institutions. Banks, unwilling to provide affordable home loans, contribute to higher poverty rates.

I learned that this disinvestment in Tacoma began in the 1980s, leading to the closure of businesses and the growth of disparities in school suspensions. Disinvestment and policies—the “three-strikes” law originated in Washington State—led to more policing and gang violence in the 1990s. This is why youth as young as 11 got stuck on a non-negotiable path toward gang violence.

I soon found myself teaching sociology courses as a volunteer at several prisons in the State of Washington, which is one of 16 states with no parole. After a year of teaching in prison, I was able to bring a camera into my classroom with the intention of putting a human face and voice to the crisis of punishment in the United States and the role of education as rehabilitation. While teaching at the Washington State Reformatory in Monroe about sociological imagination (an awareness and ability to understand how personal experiences are shaped by historically conditioned social forces), I discovered a larger story.

I heard origin stories that transcended prison. These stories went into neighborhoods and inside homes, courtrooms, legislative hearings, community meetings, and schools. The stories included drive-by shootings, drugs, policies, and policing, all of which revealed a culture of punishment toward the most vulnerable—our children.

A spark from a classroom discussion led to a decade of filming inside Washington State prisons and Tacoma neighborhoods. We discovered a main character, Kimonti Carter, and a chorus of his incarcerated peers.

This became more than a prison film. It became an American story showcasing one city, Tacoma, as an example of “Everytown, USA” through the eyes of a community decimated by racist policies of punishment, drugs, poverty, and fear. In our film, Since I Been Down, former gang members, law enforcement, politicians, mothers, and other community members weave a chorus of voices into a grand tapestry, telling the story of exactly how and why it is that the United States incarcerates more people than any other nation on earth. But perhaps more importantly, our film shows what can be done to change it.

A 40-year prisoner-initiated organization inside Washington State prisons called the Black Prisoners’ Caucus, and its 2013 higher education program Taking Education and Creating History (TEACH), supports prisoners teaching prisoners across race, ethnicity, and gang lines in a way that questions oppression and the violent behavior it perpetuates.

Since I Been Down showcases this social justice organization through the people “inside,” who are living the experience of incarceration. They have cultivated relentless and dynamic strategies of activism and resistance from neighborhoods, classrooms, and on to prisons. We examined what justice truly means and how it is practiced.

Since I Been Down is told by the people who have lived these conditions and unravels intimate stories from interviews brought to life through archival footage, cinema verité discussions, masquerade, and dance. These stories reveal why children commit violent crime and how these children—now adults—are breaking free from their fate by creating a model of justice that is transforming their lives, our humanity, and a quality of life for all our children.

The culture of punishment and its consequence is our shared reality in America today. Especially in these times of legislated violence and fear of difference, who better to show us the triumph of the human spirit than those caught behind bars for life?

Now is the time for inspiration. For me, it is astonishing that inspiration has come from people who are living in lifelong captivity.

“At the end of the day, how we punish says as much about us as about those we punish.” —   Austin Sarat

Gilda Sheppard was a finalist in the film category for the 2021 Media for a Just Society Awards for Since I Been Down, which she wrote and directed. See the full list of finalists and winners on our website.

“The role of the artist is like a lover. If I love you, I have to make you conscious of things you don’t see.” ― James Baldwin On my last days of filming a short documentary in a refugee camp in Ghana titled Women Together as One, one of the women leaders there, Helen, said,…
We use cookies on our website to give you the most relevant experience by remembering your preferences and repeat visits. By clicking “Accept”, you consent to the use of ALL the cookies. However you may visit Cookie Settings to provide a controlled consent.
Cookie settingsACCEPT
Manage consent