Ensuring the Safety of LGBT Youth

Ensuring the Safety of LGBT Youth 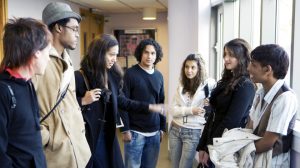 NCCD has two new exciting projects that focus on issues around LGBT youth in the juvenile justice and child welfare systems, “Dispelling Myths Surrounding the Incarceration of LGBT Youth” and “Improving Permanency for LGBT Youth.” These projects will build upon Dr. Angela Irvine’s 2008 research, which found that 15% of youth involved with the juvenile justice system identified as Lesbian, Gay, Bisexual, and/or gender non-conforming.


NCCD has two new exciting projects that focus on issues around LGBT youth in the juvenile justice and child welfare systems, “Dispelling Myths Surrounding the Incarceration of LGBT Youth” and “Improving Permanency for LGBT Youth.” These projects will build upon Dr. Angela Irvine’s 2008 research, which found that 15% of youth involved with the juvenile justice system identified as Lesbian, Gay, Bisexual, and/or gender non-conforming. Her report, “We’ve Had Three of Them’: Addressing the Invisibility of Lesbian, Gay, Bisexual and Gender Non-Conforming Youth in the Juvenile Justice System“, was published in a 2010 Columbia Journal of Gender and Law article. NCCD’s current research will allow us to go beyond identifying trends to understanding how all of the variables are linked. Click here to learn more about NCCD’s LGBT projects.

The Unfair Criminalization of Gay and Transgender Youth

Read on for more information about the Alameda County Probation Department’s LGBT Task Force and how it exemplifies the importance of multiagency and community collaboration. Alameda County is one of three counties (the other two are Orange and Fresno counties) participating in the Improving Permanency for LGBT Youth project and they decided to implement an LGBT-inclusive, nondiscrimination policy at their Juvenile Justice Center.

The purpose of the task force is to adopt an LGBT-inclusive nondiscrimination policy, enhance the quality of supportive services, and highlight unique concerns faced by LGBT youth and their families during and after detention. Additionally, the task force will provide probation officers and service providers with community resources that can support the successful transition of LGBT youth out of the juvenile justice system and back into their communities. The task force is an example of an extraordinary opportunity for the kind of systems improvement that will result in better outcomes for disenfranchised populations, especially when interagency communication and collaboration with community-based organizations, advocates, and members are present.

The task force consists of the following government agencies, community-based organizations, and advocates:

As with Annie E. Casey’s Juvenile Detention Alternatives Initiative reform sites, the success of this task force depends in large part on bringing together agencies that are normally viewed as adversarial or that rarely collaborate. The decision of the senior prosecuting and defending juvenile attorneys to join this task force is a testament to both their commitment to justice and to youth.

Another great example of participation is represented by the presence of the Oakland Police Department, as well as the Oakland Unified School District. Police departments and schools are entryways into the juvenile justice system. The presence of these two agencies on the task force demonstrates a willingness to collaborate on educational and public safety solutions that will benefit all children at the JJC, not just LGBT youth.

As The Annie E. Casey Foundation points out, different agencies exercising authority over youth involved with the juvenile justice system usually operate as separate entities notwithstanding other agencies’ rules, thereby not functioning as an efficient “system.”[2] It is our hope that the members of this task force will utilize their collective resources to affect systemic reform that promotes the well-being of all young people.

Bernadette Brown is a Senior Program Specialist at NCCD.

NCCD has two new exciting projects that focus on issues around LGBT youth in the juvenile justice and child welfare systems, “Dispelling Myths Surrounding the Incarceration of LGBT Youth” and “Improving Permanency for LGBT Youth.” These projects will build upon Dr. Angela Irvine’s 2008 research, which found that 15% of youth involved with the juvenile…
We use cookies on our website to give you the most relevant experience by remembering your preferences and repeat visits. By clicking “Accept”, you consent to the use of ALL the cookies. However you may visit Cookie Settings to provide a controlled consent.
Cookie settingsACCEPT
Manage consent