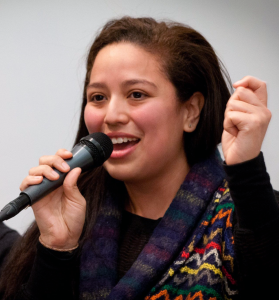 With the return of Police Commissioner William Bratton to the NYPD, New York City has once again become the epicenter of “broken windows” policing practices. “Broken windows” is based on the theory that if low-level infractions are aggressively enforced, more serious crime will then be curbed. In reality, “broken windows” is selectively applied, with data consistently indicating that people of color make up the vast majority of arrests and summonses. They then bear the brunt of the associated fines, jail times, and criminal records—further perpetuating cycles of poverty and incarceration among people of color.

In fact, a 2004 report from the National Research Council found that policing is more effective when it is focused and tailored to solving a particular problem, rather than across-the-board enforcement efforts and random patrolling, which is how “broken windows” is applied. The report also shows that when large portions of the population are interacting with the police, as is the case with “broken windows”, it contributes to a lowered sense of police legitimacy.

A better way forward is to develop policing strategies informed by a diverse cross-section of directly impacted communities. Broadly known as “community policing,” this approach is centered around collaborative partnerships, joint problem-solving, and shared decision-making power to enact transformative change. New York City has an opportunity to take this approach via the Floyd Joint Remedies Process, a court-ordered process to solicit input for police reforms from a variety of stakeholders. This process, which is in its beginning stages, is an outcome of Floyd v. New York City, the landmark federal court case that found stop-and-frisk to be unconstitutional. As this yearlong process begins, it will be crucial that there is a deep investment, both of time and resources, but also in the notion that the wants of affected communities are central to public safety. Furthermore, even marginalized communities are not immune from perpetuating the same structures of racism, sexism, homophobia, etc. that permeate society, so for this process to be successful it must also be anti-discriminatory at its core.

Of course, “community policing” or the Floyd Joint Remedial Process is not the end-all solution to police reform but should be seen as a strategy for developing policing tactics and practices that are both informed by and accountable to the communities where they are applied.

There still remains a need for community-led solutions to public safety that are detached from law enforcement, like the work of Save Our Streets (S.O.S), an organization that deploys unarmed mediators to interrupt gun violence in real-time. There still remain laws to pass and polices to implement, like the Right To Know Act which promotes communication, transparency and accountability during everyday encounters between NYPD and the public. There still remains the list of 11 unmet demands developed by police-reform advocates during the Justice for Eric Garner protests in NYC.

There is much work to do, but community-driven police reforms, when purposefully anti-discriminatory and given the resources needed to succeed, is a strategy we should embrace because it reduces crime, it restores trust, and it acknowledges that the people who experience the daily indignities of police discrimination and abuse are best poised to hold the police accountable.

Alyssa Aguilera is the Political Director of Voices of Community Activists & Leaders (VOCAL-NY) a grassroots membership organization that builds power among low-income people impacted by HIV/AIDS, drug use, and mass incarceration.

With the return of Police Commissioner William Bratton to the NYPD, New York City has once again become the epicenter of “broken windows” policing practices. “Broken windows” is based on the theory that if low-level infractions are aggressively enforced, more serious crime will then be curbed. In reality, “broken windows” is selectively applied, with data consistently indicating that people of color make up the vast majority of arrests and summonses. They then bear the brunt…
We use cookies on our website to give you the most relevant experience by remembering your preferences and repeat visits. By clicking “Accept”, you consent to the use of ALL the cookies. However you may visit Cookie Settings to provide a controlled consent.
Cookie settingsACCEPT
Manage consent