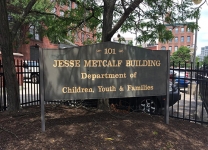 Child welfare agencies across the country are struggling, but early last year it became clear to me that Rhode Island was an outlier.

A series of reports, including one from a group of state lawmakers, and another from the Annie E. Casey Foundation, revealed serious problems at Rhode Island’s Department of Children, Youth, and Families (DCYF). I remember poring over it in the newsroom with my editor with a measure of shock. We had dropped to the bottom of the list on some of the most important child welfare metrics—removing more children from the home than any other state, placing kids in group homes at rates higher than almost any other state, cycling children in and out of the system more frequently than most. Our social workers carry caseloads nearly twice the recommended average—sometimes well over 20 at a time, when the recommendation is about 12–14.

More news came out revealing that DCYF had been badly mismanaged, and finances were a shambles. That was after repeated efforts over the years to overhaul the system to no avail.

Meanwhile, children and their families suffered. New efforts are underway to reform the agency and improve those child welfare metrics, but the process is slow, and reformers face challenges that have festered for years.

How did it come to this? I decided to examine the system as a whole and try to uncover the biggest drivers of its problems through the stories of people inside the system.

One of the biggest problems is the number of kids Rhode Island places in group homes, or congregate care. Most child welfare experts will tell you kids tend to do worse if they spend too long in congregate care, and that it is mostly inappropriate for very young children. Families are best for most kids. DCYF staff agree that it is a problem, but they say they often have little choice because there are not enough foster families or alternatives to group homes. (Don’t get me wrong: There are some great group homes, but the quality varies as much as the staff.)

Let me pause here and say that this is complicated, difficult work. DCYF and other child welfare agencies around the country dwell in our darkest corners: child abuse and neglect. These families need more than a cursory visit; some need an embrace of services to help turn things around. But when DCYF workers shoulder the cases of so many families in need, it is nearly impossible to do more than crisis management, or so one caseworker told me during a ride along.

More caseworkers might help. But so would more money—or money better managed. DCYF has run over budget for years. The year before last, they ran $16 million dollars into the red. An audit recently uncovered much worse: no financial controls in place. They could not even find the contracts DCYF had signed with all the outside agencies they tap to work with kids and families. When they managed to track them down, they found several duplicates and lots of vague agreements with no performance measures. Overall, some of the most basic accounting procedures were missing.

In my series “Children in Crisis,” I tried to get beyond the systemic problems to hear the personal stories of families and professionals involved. I spoke to a young woman who basically grew up in group homes and has struggled with depression and anxiety since. I spent the day with a social worker who says her caseload is so overwhelming she can barely do much more than put out fires. She did not even have an agency-issued cell phone, car, or car seats for kids she might have to transport to appointments. Instead she used her own or borrowed from friends. I spoke with doctors and psychiatrists who treat foster kids, for whom just trying to track down medical records can be a challenge. And I spoke with researchers, who explained to me how the stress of being in the system stamps young psyches for life. A parent whose child was removed by DCYF shared her story with me, as well. Even though I could not confirm the details of her story, the pain she conveyed about trying to win her daughter back stayed with me.

What surprised me was the willingness of people who have been involved in the system to share their stories. I don’t use a lot of names to protect their privacy, but many were open with me about their painful experiences. I heard many inspiring stories. So many Rhode Islanders work in the field of child welfare or volunteer their time—often without a lot of support and for little money. They include foster families and people who recruit or support foster families—the ones who take a call in the middle of the night about a baby waiting for them at the hospital or learn to love an agitated, mistrustful teenager whose own family has fallen apart

I hope the series elevated the conversation about child welfare from a list of damning statistics to a richer discussion about the elements that weigh a system down and how that affects the people it tries to serve. I hope it raised awareness about the thousands of kids in Rhode Island (and beyond) who cycle through this system, for no fault of their own tossed about by family trauma, relying on the state not only to keep them safe, but perhaps to parent them for a while. That is a tall order for any state, but my reporting shows we can aim higher.

Child welfare agencies across the country are struggling, but early last year it became clear to me that Rhode Island was an outlier. A series of reports, including one from a group of state lawmakers, and another from the Annie E. Casey Foundation, revealed serious problems at Rhode Island’s Department of Children, Youth, and Families…
We use cookies on our website to give you the most relevant experience by remembering your preferences and repeat visits. By clicking “Accept”, you consent to the use of ALL the cookies. However you may visit Cookie Settings to provide a controlled consent.
Cookie settingsACCEPT
Manage consent