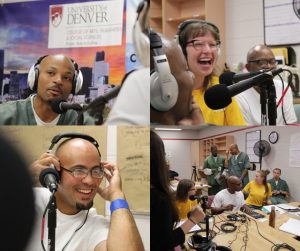 With(in) is a podcast committed to shifting the conversation about who is in prison, specifically within the Colorado Department of Corrections (CDOC). We do this through meaningful, complex, and enlightening conversations with people who are incarcerated in Colorado as well as those who work in the system. With(in) is a collaboration between the DU Prison Arts Initiative (DU PAI) and CDOC. Recorded in the vault of the Denver Reception and Diagnostic Center (DRDC), the podcast is hosted by Denise Presson and Andrew Draper, who are incarcerated, and myself.

For our very first episode of With(in), titled “The Shift,” we sat down with Dean Williams, executive director of CDOC since 2019. In this episode, he outlined his plans to implement normalization efforts within the state’s prisons and explained why it is time to make this shift—namely to no longer see prison as a place for punishment. Drawing on his experience with Alaska’s Department of Corrections and from prison system models in Norway, Mr. Williams explained his position on rehabilitation, care, and why and for whom prisons exist.

At one point during the episode, Denise said, “When you meet a human being it changes your perspective.” DU PAI hopes that as you listen to any episode of With(in) you allow yourself to meet each host and guest as you would any other person in your life. Everyone featured on With(in) agrees that reducing people to their crime or harm (CDOC residents) or their job (CDOC staffers) doesn’t allow for the complexity of humans to be present. It is in our complexity where we find connection, restoration, and healing.

In “It’s a Civil War,” With(in)’s second episode, Andrew reflected on his experiences growing up as a gang member in East Denver and the vicious cycle of violence in gangs that largely goes unnoticed. Sharing personal stories of what his life looked like when he ran with his gang, Andrew illustrated the harm perpetuated by gang culture and how his experiences led him, along with With(in) team members Angel Lopez and Chuck Martinez, to help young people at risk of falling into gangs. Later, our hosts spoke with DRDC resident Lou Lopez about the Chicano gang he grew up in on the west side of Denver. Lou explained his perspective on how the term “gang” is simply a label, used to “other” certain groups of people.

Our guests grappled with nuance during the episode, saying that it’s not a crime to be poor, that choices are made through suffering, and that sometimes the person one loves the most hurts them the most. These poignant messages articulate the systemic nature of gang life in Denver, both in the 1990s and now. We hope this conversation can shed more light on the complex issue of gang culture and what motivates people to join gangs.

The With(in) podcast team is humbled to receive Evident Change’s 2020 Media for a Just Society Award for best radio show. Thank you so much! Congratulations to the other radio finalists: A Desperate Bargain, Jemele Hill Is Unbothered, and Supervision. We look forward to listening to and learning from your shows.

With(in) is a podcast committed to shifting the conversation about who is in prison, specifically within the Colorado Department of Corrections (CDOC). We do this through meaningful, complex, and enlightening conversations with people who are incarcerated in Colorado as well as those who work in the system. With(in) is a collaboration between the DU Prison…
We use cookies on our website to give you the most relevant experience by remembering your preferences and repeat visits. By clicking “Accept”, you consent to the use of ALL the cookies. However you may visit Cookie Settings to provide a controlled consent.
Cookie settingsACCEPT
Manage consent