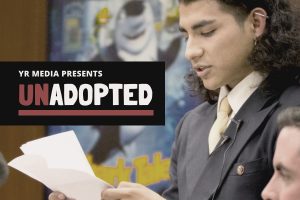 I turned 21 in 2017, which was a pivotal year for me. It could go one of two ways: I could either get what felt like a forced divorce because the foster care system had outgrown me—and end up an angry adult filled with rage. Or, I could turn 21 and choose to emancipate, on my own terms, and get the closure I deserved. I chose the second option. I knew I wanted to process everything that had happened to me since I was placed in the foster care system at the age of 1. After living with several different foster families in different states throughout my childhood, I was now aging out of the system.

When I emancipated, I produced a broadcast media story about my own experience in the foster care system with YR Media. I was granted unprecedented media access to the courtroom proceedings, and the resulting story was so compelling that NPR aired what then became an Edward R. Murrow and Third Coast/Richard H. Driehaus Competition award-winning radio piece. YR Media received hundreds of emails, calls, and comments from across the world from people wanting to help me. After that, I wrote a story about college after foster care for The New York Times and continued to publicly advocate, write, and speak on behalf of foster youth.

When I saw how my stories were being leveraged by foster care agencies, educators, and advocates working to improve the system, I knew I wanted to create a feature documentary that would be an even bigger tool for change.

I made Unadopted to answer the question: What happens to those who grow up in the system and emancipate? My focus on child welfare comes from my experience spending 20-plus years as a ward of the state. There is so much that goes unspoken, especially when it comes to pre-teens and young adults in the system. In the Unadopted documentary, we uncover how that happens, and who is accountable for the system’s failure to find permanent family placements for kids like me.

Noel Anaya received the 2021 Media for a Just Society Award in the youth media category for his film Unadopted. See the full list of finalists and winners on our website.

I turned 21 in 2017, which was a pivotal year for me. It could go one of two ways: I could either get what felt like a forced divorce because the foster care system had outgrown me—and end up an angry adult filled with rage. Or, I could turn 21 and choose to emancipate, on…
We use cookies on our website to give you the most relevant experience by remembering your preferences and repeat visits. By clicking “Accept”, you consent to the use of ALL the cookies. However you may visit Cookie Settings to provide a controlled consent.
Cookie settingsACCEPT
Manage consent