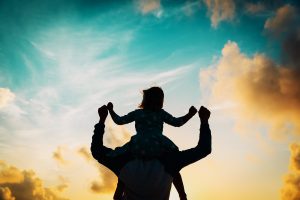 “I try to have fun,” Caridad said in our last interview. “We take Tate on bike rides, I race in the wheelchair with her. We make due, but it’s not the same. Even she said, ‘why don’t we do projects anymore?’ Make clay and make art and garden and plant. It’s so hard to have to explain why your mother who was able bodied a while ago can’t even brush her own kid’s hair now. The little things, I miss them.”

At one point in the video interview Bryce joined Caridad. They shared an intimate moment where Bryce voiced how scared he is to lose her, and how he’s unsure of how to parent Tate alone.

“Caridad gave me a lot of get-out-of-jail-free cards,” he said. “She called me when I was at work and said, ‘If this is too much, you didn’t sign up for this, take Tate and go. Come visit me when you can, but you don’t have to be here for this.’ I’m sitting there crying in the meeting room and I was like no, no, we don’t run from this. No one should have to do this on their own.”

Even as Caridad prepares for the end of her life she’s busy caring for others. “I want to believe that over the years my survival skills have rubbed off on you,” she said, looking at Bryce. “If it’s therapy, go do that. For me it was going to a rage room, destroying it, and coming back. Let Tate vent however she can. Then move on, day by day and step by step. It will get easier.”

Bryce started to cry; Caridad put her head on his shoulder. “My takeaway is that even though you feel alone, you’re not. Gena is there, Nancy is there. Maria will be. You’re not alone, and you won’t be. I don’t want you to hold on to our memories and our life—I’m not saying throw it away—take the time to heal so you can help Tate heal. When you guys are in a good place and have found your rhythm in life, you know, you deserve to be in love. She deserves to have a motherly figure in her life. You are still young enough you can still have a good life after me and raise a beautiful, hella eccentric child. It will take some work but it’ll get easier. I suspect a couple years after, you’ll start dating, maybe you’ll remarry.”

Witnessing Caridad’s emotional generosity toward Bryce I thought about how trauma really does confront people with the best and the worst. You see the horrendous things that people do to children, to each other, but you also see resiliency, the potential of love, the capacity of caring, the power of commitment to others and to oneself, the knowledge that there are things that are larger than our individual endurance. And in some ways, I don’t know you can truly grasp the wonder of life without experiencing some of its darkness.

“I want Tate to know throughout all the hurt and suffering I’ve been through I found love through her and that I never gave up. That I fought to the bitter end to live for her to have a good life. Tate is going to have a lot of doors open because I struggled to make sure her life is full of opportunities and there wasn’t so much struggle and heartache, and it makes me happy to know she’ll have a great father at her side. And it lets me know she will have a better life than me. And that the cycle of abuse was broken here. I fought through and through for that.”

“What excites me is that she has hopes and dreams that are being supported by people around her,” Caridad continued. “That’s something I didn’t have for a long time. Here in Seattle she’ll have a good school, will have a safe place to live, won’t have to worry about food, and won’t have to claw her way for basic necessities like I’ve had to do in the past. She won’t have to fear for her life every day.”

​ Ryan Berg is an author, activist, and longtime youth worker. This is the seventh and final piece in a series about a young woman whose name has been changed to protect her privacy. Read more about the series and its author here.

“I try to have fun,” Caridad said in our last interview. “We take Tate on bike rides, I race in the wheelchair with her. We make due, but it’s not the same. Even she said, ‘why don’t we do projects anymore?’ Make clay and make art and garden and plant. It’s so hard to have…
We use cookies on our website to give you the most relevant experience by remembering your preferences and repeat visits. By clicking “Accept”, you consent to the use of ALL the cookies. However you may visit Cookie Settings to provide a controlled consent.
Cookie settingsACCEPT
Manage consent