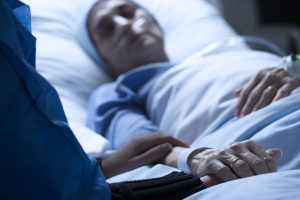 After a series of unsuccessful foster home placements with varying degrees of abuse, Caridad was placed with an older, single woman. Right away Caridad noticed something markedly different about this foster parent. She listened in a way no one had before, and she was understanding of the trauma Caridad had experienced. She made efforts to connect with Caridad and inquire about her interests.

“She took it easy with me. At the time I was a vegetarian and she was like, ‘okay, let’s cook, what do you like?’ So we’d make all these vegetable dishes. She always cooked for me and never complained.” Along with her new younger foster sister, with whom Caridad shared a room, and two older children—by then young adults—who the woman had adopted, they all sat down and had dinner together. This was an entirely new experience for Caridad.

Caridad’s new foster mother seemed to understand that after all the trauma and lack of stability she experienced, Caridad was not going to respond well to an uncompromising set of rules so they came up with house rules together. Caridad was always allowed to stay out overnight, but her foster mother wanted to know where she was. She explained it was out of concern rather than a desire to control Caridad’s behavior. They tried to keep the lines of communication as open as possible. The woman inquired about Caridad’s life with genuine thoughtfulness and always remained nonjudgmental. Over time, trust and connection began to grow.

“After a while she was like, ‘I think I have it in me to adopt one more kid. I think you’d be a good addition to the family.’ She took me to work and told everyone I was her kid and she was proud of me. And slowly it began to heal me. I thought I was happy and I could grow and that I found a home.”

Just as Caridad was beginning to feel loved for the first time the unimaginable happened. Caridad had been gone from the home for a few days with her boyfriend. She tried to call her foster mom to check in but received no answer. Finally, one of the woman’s older children contacted Caridad. She instructed Caridad to come to the hospital immediately. Their foster mother had an aneurysm and was rushed into intensive care.

Caridad told me this story during one of our video chats. On my computer screen her eyes narrowed, her lips pursed. Her voice trembled as she excavated yet another Shakespearean-level tragedy from her life. “I’m trying not to cry,” she said softly, looking away from the screen. “So she was in the hospital bed, tubed up, in a coma. And I was heartbroken. I didn’t know what to do. I was scared. And the nurse came in and said, ‘Talk to her. A lot of people think they can hear you. Hold her hand and talk to her.’ So I did.”

At this point, Caridad looked up and off screen toward the sound of a small voice. Caridad’s daughter, Tate, had entered the room, walked up to her mother, and put her head on Caridad’s shoulder. “Sounds like you’re crying, Mommy, so I came in to check on you.”

Caridad wiped her cheek with the back of her hand. “I am. I’m talking about a sad story that happened to me when I was younger. I’m okay though.”

Caridad nodded. “Always.” Tate embraced her mother. Caridad then seemed to shake free from the memory momentarily, refocusing on the present. She looked at her young daughter. “Please put your glasses on,” she instructed.

Tate walked up to the computer and looked into the camera. “Hello!” She smiled widely, then skipped out of the room. “I’m trying to cheer Mommy up!”

Caridad wiped away tears again, smiled. “And she did, too.”

Caridad took a long breath then returned to the memory of her foster mother lying in the hospital bed. “So, I was talking to her, and it was the first time I told her I loved her and how much I needed her and how good she was for me. And the monitors started to beep and everything was going crazy. She started to twitch and stuff. The nurse asked me to leave. She died shortly after.”

No Time to Mourn

Caridad was grief-stricken, but knew she didn’t have time to mourn. “I couldn’t go to the house and pick up my stuff. I knew what would be next. A caseworker called me and said I needed to be ready the next day so she could pick me up. I was like ‘yeah,’ and I ran. That was the first stint [of homelessness]. I wasn’t having it. I didn’t want to go back to the parade of foster homes. I spent a couple years on and off the street. I wasn’t going to a home and get abused or kicked out again. I couldn’t do it. I wasn’t willing to open myself up to anyone for a good while.”

About a year later Caridad met Gena, who worked at an agency in Manhattan focusing on supporting LGBTQ youth in crisis. Although Caridad was couch hopping, finding wherever she could to stay, she refused to receive help for herself. She did, however, bring Gena her friends who also needed services and support. It was her way of staying connected to Gena without relying on her. Caridad still was not ready to trust anyone, and she was afraid if she did ask for help she’d be sent to a foster home.

She began to slowly open up to Gena during their visits, and Gena told Caridad about group homes. “I didn’t know there was another option. I didn’t know there were group homes. Eventually I got to the point where I was ready.” By the time Caridad showed up to see Gena about moving into a group home a different worker was at Gena’s desk. Caridad was told that Gena took another job at a different agency. “I threw a fit and refused to leave until someone called her because she promised me that when I was ready she would be there for me. And she kept true to her word. Someone broke the rules for me. They called Gena. She brought me to Keap Street [a group home in Brooklyn] right away. And that bit is history.”

​Ryan Berg is an author, activist, and longtime youth worker. This is the forth piece in a series about a young woman whose name has been changed to protect her privacy. Read the next blog post in the series here. Read more about the series and its author here.

After a series of unsuccessful foster home placements with varying degrees of abuse, Caridad was placed with an older, single woman. Right away Caridad noticed something markedly different about this foster parent. She listened in a way no one had before, and she was understanding of the trauma Caridad had experienced. She made efforts to…
We use cookies on our website to give you the most relevant experience by remembering your preferences and repeat visits. By clicking “Accept”, you consent to the use of ALL the cookies. However you may visit Cookie Settings to provide a controlled consent.
Cookie settingsACCEPT
Manage consent