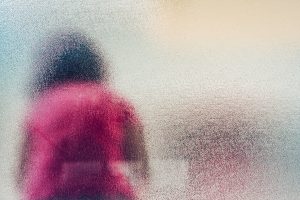 Caridad grew up on a street in the Bronx, New York, pocked with abandoned storefronts. Her family’s two-bedroom apartment housed Caridad, her birth parents, and her five siblings. Caridad doesn’t remember a time when violence wasn’t a part of her life. She was severely abused, both physically and emotionally.

“When I was 7 it turned into sexual abuse where I was being sold to men in exchange for drugs for my biological mother, for about seven years.” She made numerous attempts to get help. She called the police; she tried running away. But Caridad’s biological mother was a manipulative addict. She knew how to charm and persuade authorities to convince them everything was fine, which always resulted in Caridad being put back in her parents’ home. According to Caridad, Child Protective Services did check on the house once. “I showed the lady the drugs and showed her my bruises from the beating from the night before and after she spoke with my birth mother she somehow just left and left me there. I got the ass whooping of my life for snitching.”

One summer, when Caridad was 12 or 13, she went to a summer youth program, a kind of day camp for underprivileged kids. The night before it started her mother had flown into a rage and beat her, leaving deep bruises on her arms and legs. “My bio mom liked to embarrass me as much as she could. And she had forgotten she beat me severely the night before. But to embarrass me she made me wear shorts to the summer youth program because she knew I was in a dance group with some girls and she did not allow me to shave my legs even though I’m quite fuzzy and was dealing with puberty.” When Caridad arrived in her shorts the counselors noticed the bruises and the welts on her legs. They started asking her questions until finally she broke down and told them what had happened.

The place began to buzz. They sent Caridad to the hospital for an examination and called her birth mother, who showed up at the hospital. “She did what she does and charmed her way out of a rape kit so I never got tested. Then she lied and told people I heard voices and that they make me do bad things, that I hurt myself. So it changed from all the doctors being really nice and concerned for me to them pointing their fingers at me and questioning my sanity. And I’d been there before. They put me in a room with an oval table with the doctors and their stupid notepads. They asked questions like ‘Do you hear voices? Do they tell you to hurt yourself? Do you see things?’ I already knew they were going to send me back to her if I said I was fine. So I lied and said, ‘I do hear voices and they make me do bad things.’ I made up a bunch of shit that I did. And they put me into a mental hospital.”

For the first time in years Caridad felt safe, but eventually her birth mother took her home. A couple months later Child Protective Services returned. Caridad heard that the first CPS worker who came to their house was fired for taking bribes and leaving children in unsafe homes. The agency was reinvestigating all her cases, and Caridad was one of them. When the new caseworker walked into their home, saw Caridad, and assessed her condition, she removed her immediately. Caridad was relieved someone could see her true situation. “We were malnourished,” she told me. She stole junk food for her and her sisters from local bodegas to get by and then offered to sweep and stack goods to pay back the storekeepers. It wasn’t until Caridad became a ward of the state that it was discovered she had asthma, diabetes, and was clinically obese.

Her parents must have sensed they were at real risk of being found out. To avoid an investigation they went to family court claiming Caridad was the cause of the family’s woes, that she was out of control. Her parents put in for a PINS (person in need of supervision) petition. “They were basically saying I was a troubled child and they wanted to give me up to the state. That was that. Foster care.”

Foster care, for many young people, is a broken system, hobbled by an outdated bureaucracy, underfunded agencies, and overburdened workers, which frequently results in dire outcomes. Research has shown that children placed in foster care are more likely to develop Post-Traumatic Stress Disorder than veterans of war.1 Outcome studies of this population paint a disturbing picture. Around 40% of youth formerly in foster care are unemployed, and many have trouble keeping steady employment. Educational achievement escapes many of these youth, with completion rates of high school as low as 34%. Several studies have reported high rates of homelessness among youth formerly in foster care. Health problems and lack of access to health care for this population are not uncommon. Some studies have found that nearly half have serious health problems.2 In some instances, youth are just as likely to be abused in foster care as they are in the home from which they were removed.

Caridad’s time in New York City’s foster care system was no different. She recounted a litany of harrowing experiences. “There was plenty of abuse and rape there. People kicking me out. People starving me. Locks on the fridge. Same thing over and over.” She began to rebel and act out. She found ways to survive and cope with her emotional pain. “I did self-harm. And it wasn’t for attention. For me, physical pain was more tolerable than emotional. So anytime I was really hurt and uncontrollably heartbroken and depressed and I felt I couldn’t take it anymore or I might do something silly, I’d cut myself. Not to kill but to hurt. To distract myself emotionally, to have to tend to the physical pain. And then I learned about tattoos! Then instead of cutting myself—if I couldn’t deal—I got a tattoo.”

Because of her cutting and emotional outbursts, Caridad was sent to see a psychiatrist. She claimed the meeting lasted about five minutes. “I was diagnosed with manic depressive bipolar disorder and was forced to take lithium.” She hated how the drug made her feel and secretly stopped taking it. It wasn’t until recently that a psychiatrist told Caridad she had been misdiagnosed. That doctor told her that what she experienced was most likely a trigger cycle. “I get triggered consciously or unconsciously from something in my present—a smell, a sound, a sight—about my past, then I become volatile or sad and then come back around to being regulated again only to be triggered again. It made a lot more sense to me.” The doctor explained to Caridad that her trauma shows up in cycles, and that she may regress into maladaptive behaviors, but with some tools, she can cycle back into more regulated behavior. This concept helped Caridad realize healing was a lifelong journey and not a destination.

​Ryan Berg is an author, activist, and longtime youth worker. This is the third piece in a series about a young woman whose name has been changed to protect her privacy. Read the next blog post in the series here. Read more about the series and its author here.

Caridad grew up on a street in the Bronx, New York, pocked with abandoned storefronts. Her family’s two-bedroom apartment housed Caridad, her birth parents, and her five siblings. Caridad doesn’t remember a time when violence wasn’t a part of her life. She was severely abused, both physically and emotionally. “When I was 7 it turned…
We use cookies on our website to give you the most relevant experience by remembering your preferences and repeat visits. By clicking “Accept”, you consent to the use of ALL the cookies. However you may visit Cookie Settings to provide a controlled consent.
Cookie settingsACCEPT
Manage consent