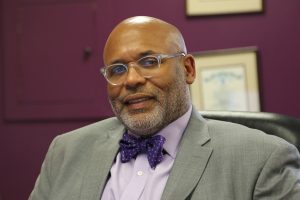 You don’t need to be a policymaker or work inside the criminal justice system to have an impact on mass incarceration in the United States. Mike Pearson, an NCCD board member, makes it his business to impact the system.

Pearson, a self-described social entrepreneur, is the founder, president, and CEO of Union Packaging (UP), an earth-friendly food service packaging maker in Philadelphia. “The community where we are located is disproportionately hit by the injustice of the justice system,” Pearson said. His answer to this social dilemma is “second-chance” hiring.

While UP officially addressed second-chance hiring as part of a strategic plan just a few years ago, Pearson said it has been practiced by the company since he founded it. He sees it as being at the intersection of two of the company’s core values: community stewardship and empowering all stakeholders.

The concept has earned the company and Pearson many kudos: UP was selected as the 2014 Goodwill of Delaware and Delaware County Workforce Partnership Employer of the Year. In 2015, Pearson received the Business Leadership in Diversity Award from Fisher Phillips for his longstanding commitment to fostering diversity in business within the Philadelphia business community. The same year, he was named an outstanding director by the Philadelphia Business Journal. He has received many additional awards and honors.

This doesn’t mean there aren’t challenges to the second-chance hiring practice. “It takes leadership to ensure that companies don’t get trapped by administrators in the HR function who are unwilling to embrace it. Chambers of commerce, other business groups should embrace helping returning citizens become employed.”

He sees many benefits to hiring returning citizens, especially in today’s tight labor market. “Millennials are more socially conscious and looking for purpose-driven employment,” he explained. “It’s a driver for retaining talent.”

The practice makes UP more competitive in other ways, too. “If there is a dead-heat tie between two companies to provide a service or product, those making the decision are going to lean toward the company with the socially conscious mission,” he said. “It generates free goodwill.”

Ultimately, Pearson wants to see long-term criminal justice reform. In the meantime, he is doing his part. “If folks don’t get employment and can’t get food on the table, they are likely to return to the system.”

Michael Pearson has been an NCCD board member since 2015. You can read his full bio here.

You don’t need to be a policymaker or work inside the criminal justice system to have an impact on mass incarceration in the United States. Mike Pearson, an NCCD board member, makes it his business to impact the system.     Pearson, a self-described social entrepreneur, is the founder, president, and CEO of Union Packaging (UP), an…
We use cookies on our website to give you the most relevant experience by remembering your preferences and repeat visits. By clicking “Accept”, you consent to the use of ALL the cookies. However you may visit Cookie Settings to provide a controlled consent.
Cookie settingsACCEPT
Manage consent