The Blood Is at the Doorstep

The Blood Is at the Doorstep 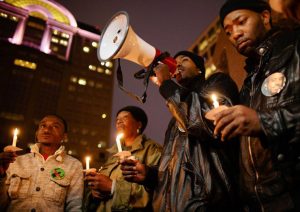 On April 30, 2014, Dontre Hamilton, an unarmed black man diagnosed with schizophrenia, was shot 14 times and killed by a Milwaukee police officer. Dontre had not been suspected of a crime: He was resting in a public park, and his only offense was making a nearby Starbucks employee uncomfortable with his presence. As the years pass since Dontre’s death, his story continues to gain relevance through news cycles about police shootings of unarmed black men, racial profiling by Starbucks employees, and our nation’s collective outrage as viral videos of white people calling the police on people of color for minor grievances proliferate online.

Unarmed black Americans killed at the hands of police has been one of the most pressing social issues in America since 2014. Each week seems to usher in a new name with a disturbing set of details. Despite the constant deluge of news coverage, these complex cases rarely receive a nuanced, personal look. By showing the aftermath of a police shooting from one family’s intimate perspective over the course of three years, as we do in The Blood Is at the Doorstep, we can help to challenge broader social and cultural assumptions around both race and mental illness. We have an opportunity to help build intersectional understanding as our nation struggles with the solutions to minimize these fatal incidents involving the police.

The immediate response from the Milwaukee Police Department in this case was to blame Dontre’s death on mental illness and refuse to accept responsibility as a department for the tragedy. Nationally, it is estimated that nearly 1,200 people are killed by police each year; roughly one quarter of them suffer from a diagnosed mental illness. I was personally drawn to this story by the struggles my own family has had in dealing with mental illness. A cousin who I grew up with in Northern California developed schizophrenia in his 20s, and he has been homeless in our hometown for the past several years. He is currently in jail, awaiting a hearing on trespassing charges. It was important to me to tell Dontre Hamilton’s story and to de-stigmatize and amplify the voices of one family struggling with the very difficult and complex dynamics that surround caring for an adult family member suffering from a mental illness.

With inadequate services for the mentally ill, police departments are increasingly called to be the first responders during times of crisis for those suffering. Despite this, mental health training for police departments is largely insufficient, if provided at all. As the scrutiny of these fatal incidents involving police continues to grow, state governments are being forced to consider new laws and reformative measures to reduce the incidents. Our film depicts a grassroots movement born out of tragedy that applied peaceful, strategic protests to those in power to effect substantial change. Following Dontre’s death, the Milwaukee Police Department became one of the first in the United States to require crisis intervention training for all officers. I believe that this film, and the Hamilton family’s story, is uniquely positioned to influence the conversation around systemic, reformative measures for police departments across the United States.

My hope is that the Hamilton family story is a rallying cry that can help inspire a nation of concerned citizens to take an active approach to engaging in their own communities around issues of justice and reform.

Erik Ljung was named a finalist in the film category for the 2018 Media for a Just Society Awards.

On April 30, 2014, Dontre Hamilton, an unarmed black man diagnosed with schizophrenia, was shot 14 times and killed by a Milwaukee police officer. Dontre had not been suspected of a crime: He was resting in a public park, and his only offense was making a nearby Starbucks employee uncomfortable with his presence. As the…
We use cookies on our website to give you the most relevant experience by remembering your preferences and repeat visits. By clicking “Accept”, you consent to the use of ALL the cookies. However you may visit Cookie Settings to provide a controlled consent.
Cookie settingsACCEPT
Manage consent