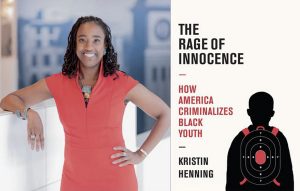 I will never forget the day I walked into a courthouse in Durham, North Carolina, and saw a line of children being escorted down the hallway. The boys, mostly Black and Latino, were chained together by their arms and legs. No one else seemed to be shocked by the scene, but all I could think of was Roots, the TV mini-series based on Alex Haley’s epic account of slavery in America. I had no idea we shackled children in modern society. I was about two weeks into my first year of college, and it was the first day of my internship with the local prosecutor’s office. That moment changed my life and led me to a career as a defense attorney for children.

I have now been representing children charged with crime in the nation’s capital for the last 26 years. In that entire time, I have only represented four white children. That’s it. Every other child has been Black. Those numbers might lead you to believe that there are no white children in Washington, DC, or that white children don’t commit crimes. Neither would be true. There are plenty of white children in the city, and teenagers of all races engage in the types of reckless behavior that can be defined as criminal. We should all be outraged by the racial disparities that are evident across the country.

Our nation’s obsession with the incarceration of Black America starts with Black children. Unlike white youth—who have the freedom to test boundaries, experiment with drugs and sex, and figure out who they are and who they want to be—Black youth are seen as a threat. They are denied the opportunity and privilege to behave like children. Black children have been expelled from school, arrested, and even killed for “horseplay” on the beach, playing with toy guns in the park, shopping at the mall, looking at a cell phone in class, listening to hip hop, and riding their bicycles in the neighborhood. And when they do make mistakes and commit serious crimes, we treat them as if they are beyond redemption, sending them to adult prisons with severe sentences like life without the possibility of parole.

The Rage of Innocence grew out of my anger and indignation about the many Black youth who have been traumatized by the hyper-surveillance, over-policing, and criminalization of their normal adolescent behaviors. I wrote this book for young people like my client “Sherice,” who was arrested in school when she grabbed her boyfriend’s cell phone to see if he had been texting with some other girl. A school resource officer saw the couple arguing and decided to intervene. His intervention was to arrest her and send her to court where she was prosecuted for robbery—for “taking the property of another by stealth or force.” In the charging document, she sounded like a serious violent felon. In reality, she was a normal teenager who was just acting like a teenager—emotional, reactive, and impulsive. No good could come from this “intervention.”

I also wrote this book to expose readers to the extraordinary trauma we impose on Black children when we treat them like criminals. Black children who live in heavily surveilled neighborhoods or who have been the target of significant stops and frisks by the police report high rates of fear, anxiety, distress, depression, and hopelessness. They become “hypervigilant”—meaning they are always on guard, not trusting the police. That distrust transfers over to other authority figures, like teachers and counselors. It is impossible to advocate for children as long as I have without wanting to understand how and why Black children are so often demonized by police and civilians for just being kids. This book considers these questions and calls for a radical shift in the way we view and treat Black youth in America.

Ultimately, it is a book about strong Black families, heroic parenting, racially equitable law enforcement, and valiant teaching that helps Black youth develop affirming racial identities and learn to speak out against injustice in safe and constructive ways. It is a book that paves the way for Black children to be children, too.

Kristin Henning is the author of The Rage of Innocence: How America Criminalizes Black Youth. Her book received the 2022 Media for a Just Society Award in the book award category.

This post is part of a blog series written by Media for a Just Society Award finalists and winners. Check back often to catch the latest.

I will never forget the day I walked into a courthouse in Durham, North Carolina, and saw a line of children being escorted down the hallway. The boys, mostly Black and Latino, were chained together by their arms and legs. No one else seemed to be shocked by the scene, but all I could think…
We use cookies on our website to give you the most relevant experience by remembering your preferences and repeat visits. By clicking “Accept”, you consent to the use of ALL the cookies. However you may visit Cookie Settings to provide a controlled consent.
Cookie settingsACCEPT
Manage consent