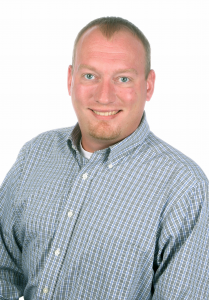 In 2008, during my time as the manager of the Outcome-Based Reporting and Analysis (OBRA) unit at the Virginia Department of Social Services (VDSS), we were fortunate to acquire SafeMeasures®. For the first time, we were able to provide the 120 local departments of social services (LDSS) with near real-time, child-specific data that illustrated the outcome and process measures critical to child welfare practice.


In 2008, during my time as the manager of the Outcome-Based Reporting and Analysis (OBRA) unit at the Virginia Department of Social Services (VDSS), we were fortunate to acquire SafeMeasures®. For the first time, we were able to provide the 120 local departments of social services (LDSS) with near real-time, child-specific data that illustrated the outcome and process measures critical to child welfare practice. OBRA’s work no longer involved slicing and dicing back-end case management data; SafeMeasures took this burden off of me and my team. With SafeMeasures being the new mode of delivery for data to local directors, supervisors, and case workers, OBRA was now free to focus on strategies to implement performance management and promote data-driven decision making.

Dashboard and scorecard approaches to display outcome data are often used in all types of organizations. OBRA chose this manner of display to feed performance data to administrative-level staff in both VDSS and LDSS. The Critical Outcomes Report (COR) was our method of delivering this data. We exported SafeMeasures data into a Microsoft Excel spreadsheet for the 14 critical outcomes that VDSS used to measure child welfare performance. OBRA used the COR to display color-coded data displaying outcome performance: measures above the performance standard were green, close were yellow, and below were red. We began graphing performance for each agency from the highest performing to those with the most areas needing improvement. While not initially popular to those on the wrong side of the graph, requests for assistance in improving documentation and practice began pouring in. Instead of seeing data as a stick, training and technical assistance helped local staff see data as a helpful tool toward improving practice.

While providing an easy overview of performance, the COR was not easily updated on a month-to-month basis. OBRA kept adding more bells and whistles until we were right back where we started when it came to slicing and dicing child welfare data. The Excel formulas were becoming increasingly complicated, and the burden to update was distracting from OBRA’s ability to assist LDSS in need of support. With the increase in data availability and transparency in viewing LDSS performance, it became imperative for OBRA to become more efficient.

In order to better serve our LDSS in need of training and technical assistance, I decided we needed to automate the COR. Internal IT staff stated that it could take months due to other priorities and that there would be an associated cost. I decided to see if the SafeMeasures team could assist. They had a history of responsiveness and churning out quick turnarounds on requests, so when I asked for assistance, I was not surprised with the response. Not only did the SafeMeasures team agree to take on scorecard automation, but they agreed to do it as a part of our existing contract with no additional cost. Much to my surprise, the analysts had a functioning COR built in SafeMeasures within two weeks of my request. After another couple of weeks of testing, we released to the field the next month. 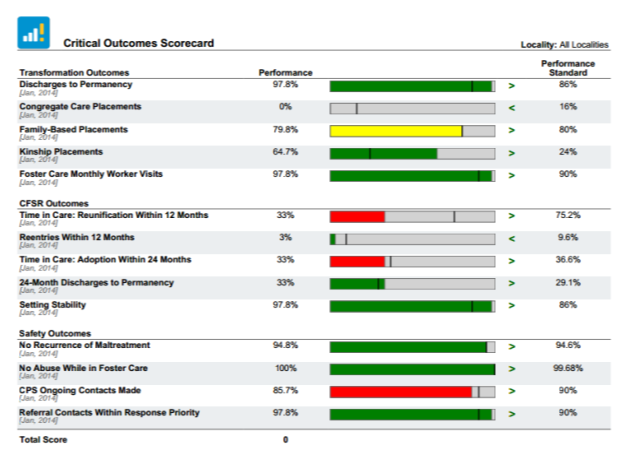 Once again, SafeMeasures helped free up OBRA to focus on providing technical assistance to LDSS. Over the next year, OBRA visited over 70 LDSS, training directors, supervisors, and workers on the COR. OBRA would tailor trainings to ensure that local staff understood case management documentation and would frequently bring in program staff to address practice issues. In one agency, foster care monthly worker visit compliance went from 10% to 100% within a week of OBRA visiting, all due to gaining a better understanding of proper documentation. The face-to-face interaction and the willingness of program specialists to work with struggling agencies increased trust between the state and local offices. Performance on the critical outcomes improved markedly, especially in timeliness and contact reports. The SafeMeasures support team became popular with workers as they fielded questions from LDSS in a timely manner.

In 2008, during my time as the manager of the Outcome-Based Reporting and Analysis (OBRA) unit at the Virginia Department of Social Services (VDSS), we were fortunate to acquire SafeMeasures®. For the first time, we were able to provide the 120 local departments of social services (LDSS) with near real-time, child-specific data that illustrated the…
We use cookies on our website to give you the most relevant experience by remembering your preferences and repeat visits. By clicking “Accept”, you consent to the use of ALL the cookies. However you may visit Cookie Settings to provide a controlled consent.
Cookie settingsACCEPT
Manage consent